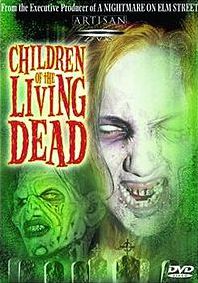 Well, it's that time of the year again.  Time for the October horror movie challenge!  31 days, 31 films - and boy did I pick a doozie to start off with.

It's 1986, and zombies are overtaking a small Pennsylvania town.  With the help of the national guard and local police they manage to do so.  A survivalist, Hughs (Tom Savini), manages to take out an entire sector on his own.  Well, largely is forced to, since his partner Randolph (Martin Schiff) prefers to be as far way from the action as possible.  Once they join up, Hughs decides they should check out the old Hayes place and make sure it is clear.

Of course it isn't.  It's filled with zeds and with some missing school children, whom the pair rescue.  However, while exploring the attic, Hughs runs into the zombie version of the local boogeyman - Abbott Hayes (A. Barrett Worland).  After a fight, Hughs is bitten, forcing Randolph to put him down.

14 years later the kids are grown up.  While Laurie (Jamie McCoy) covers her boss at the diner, the other friends head out to see a concert.  Stopping at the Hayes place, they catch the attention of the still very-much-active Abbott, who causes them to crash their VW bus off the side of the road.  After their funeral he pays a visit, biting their corpses and also taking out one of the gravediggers.  The next day he also dispatches of the owner of the cemetery after the discovery of the empty coffins.

A year later Matthew Micheals (Damien Luvara) comes to town.  His father has bought the Hayes property and the adjoining cemetery in order to build a car dealership.  Randolph goes along with the plan, while Matthew's father sends his enforcer Gregg Peters (Tom Stoviak) down to make sure things are going right. After Matthew meets Laurie they begin to slowly fall for each other.  In the meantime, though, Abbott and his zombies are on the march, and it appears that Dave's Diner may be the last stand.

While writing this I read some background information that makes what is going on in this movie much more clear.  First, let's just say that watching this one would think that the thing was directed by a bunch of grade school kids.  Dialogue delivery is quite similar to English class, where everyone takes turn reading.  Many of the shots are horrible, the lighting terrible and the zombies laughable.  The good?  The beginning is promising, although poorly edited, and Tom Savini's performance is the highlight.  The makeup on Abbott isn't bad.  The film on the whole, however, is a chore to sit through.

It does turn out that there are some reasons.  Director Tor Ramsey was harassed throughout the production by screenwriter Karen Wolf, who threatened to fire anyone who even changed one iota of her script.  He was also hampered by John Russo, who demanded that his friends work on the crew.  In the end, Ramsey delivered what he says was not a good film but at least something passable, only to have it taken away by Wolf and re-edited to what we now see.  Also, much of the dialogue was dubbed afterward, which resulted in the stilted line delivery.

And, to add insult to injury, Russo was George Romero's partner on the original Night of the Living Dead, to which this is supposedly a sequel.  It would be no wonder if the rumors of people being fired from Romero's crew for even giving this film slight praise is true.  Who knows what this could have been if Ramsey had been allowed to do what he wanted and throw the script out and center the film around Savini's character.