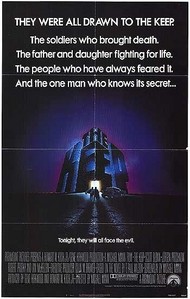 In 1942 a division of German soldiers arrive at a village in the Dinu Pass in Romania. A strategic pathway through the mountains for eventual Allied invasion, the soldiers decide to make use of a medieval keep as their base of operations.  However, Captain Klaus Woermann (Jürgen Prochnow), while touring the Keep with its caretaker (William Morgan Sheppard) and his sons, realizes that the fortress appears to have been built inside-out - as if it was meant to keep something in.

During the tour, the caretaker sees a soldier attempting to remove one of the nickel crosses from the wall, thinking it to be silver.  In punishment, Woermann gives the soldier first watch, but the young man keeps thinking that there may be treasure in the Keep.  He indeed finds a silver cross and, with the help of another soldier, pries it loose - removing a stone block in the process and revealing a chamber with another silver cross at the bottom.  In his attempt to get that one as well, he knocks out the block it is attached to, revealing a vast underground chamber containing an ancient monument.  From that monument appears a light, which proceeds to both burn and dismember both soldiers.

Concerned with the mysterious deaths that begin to occur, Woermann writes to his superiors requesting relocation.  Instead, they send Major Kaempfer (Gabriel Byrne) of the S.S., who proceeds, against Woermann's wishes, to kill the villagers in retaliation.  Kaempfer blames partisans and, after finding a strange inscription that no one can read, send for the elderly Dr. Theodore Cuza (Ian McKellan) and his daughter Eva (Alberta Watson), who are currently awaiting transportation to a concentration camp.  Bringing them to the Keep, Cuza agrees to help find out what is attacking the soldiers.  However, this is merely a delaying tactic, as the local Orthodox priest Mihail (Robert Prosky) has plans to smuggle the Cuzas out of the country.

Into the mix also comes another man, Glaeken (Scott Glenn), who is drawn to the keep after the block is removed.  He arrives in the village and becomes Eva's lover.  Meanwhile, Dr. Cuza becomes tempted by the force within the Keep, Molasar (Michael Carter), which tempts him with youth and the power to wipe out the Nazi regime, if only he will retrieve and remove a talisman that keeps Molasar locked within.  Both Father Mihail and Glaeken intend to prevent this from happening in any circumstance, although the remaining soldiers quickly find out they are up against something from their greatest nightmares.

The Keep has many, many problems, but that does not keep it from being a good movie.  Too bad Michael Mann has prevented this from being released on DVD, since the prints that are out there (in several forms) are a bit on the dark side, have horrible audio mixing and, as great as I think Tangerine Dream's score is, it overpowers much of the dialogue and seems frequently out of place. The version I saw, by the way, appeared to be closer to the theatrical release, as it does contain the scene in which Eva realizes Glaeken cannot be seen in a mirror.

On the plus side, the movie often has a dreamlike feel.  The disjointedness may annoy some people, but in this case I found that it added to what is largely a simple plot about giving into temptation to fight evil with an equal evil.  The performances are great all around.  Still, it is obvious that it was heavily edited down from its original form, and I believe there are several different endings floating around.  Still, if you are a fan of Michael Mann's movies (I tend to find his directing record rather spotty), this is a must-see.  It's better than its reputation may have you believe.