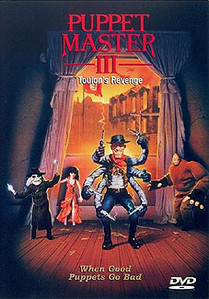 Dr. Hess (Ian Abercrombie) is under pressure from Major Kraus (Richard Lynch) to deliver on a promised formula to reanimate dead soldiers to be used on the front lines of the Germany's invasion of Russia.  A possible breakthrough occurs with Eric Stein, Kraus's driver, attends a puppet show put on by Andre Toulon (Guy Rolfe).  The puppets seem to move on their own, and Toulon has found a way to animate them.

Using Toulon's show (which lampoons Hitler) as an excuse to arrest him, Kraus sends in the Gestapo.  In the melee, Toulon's wife Elsa (Sarah Douglas) is shot by a soldier, and is killed by Kraus rather than taken for treatment as promised.  With the help of his puppets Pinhead and Tumbler, Toulon escapes on his way to Kraus's headquarters, gathers up the rest of his puppets and sets up shop in an abandoned building.

With the authorities searching for him, Toulon begins to take out those responsible for his wife's death.  Stein is soon attacked, as is Kraus's superior, General Mueller (Walter Gotell).  However, Toulon's location is soon revealed to Hess, who has had some limited success with the fluid that animates the puppets, by a boy named Peter (Aron Eisenberg), who has befriended the puppet master.  At the same time, Peter's father (Matthew Faison) has also revealed the hiding place to Kraus.  Toulon once again escapes, but this time with a new puppet named Blade who bears a striking resemblance to Kraus - and both the puppets and their master have some unfinished business.

If anything, I find this movie a bit more impressive than I did when it first came out, and I thought it was the best of the series at that time.  What impresses me is that, with an 18-day shoot and almost no budget, David DeCoteau came up with what he did.  He may be fairly vilified for producing many of the worst movies in the series, but here he breaks out of the sometimes lethargic direction found in many movies made by Full Moon.  Yes, there are some continuity problems, particularly in the fact that occurs in 1941 when in the original Toulon committed suicide in California in 1939, but these are little quibbles when you factor in the performances of Guy Rolfe, Ian Abercrombie and Richard Lynch, as well as plenty of puppet action.

Of particular note, this is really where most people should stop with this series.  I have seen parts four and five, and those I have no desire to see again.  After both the promising ending of Puppet Master II and the admirable job of Puppet Master III, it was a shame that later movies just became a cruel joke - especially as Full Moon began to see less and less return and Charles Band and his group of directors just seemed to stop caring.  1989 to 1995 was the high time for these guys, and few of their movies succeed like this one.

And Six Shooter is a great addition to the puppet pantheon.