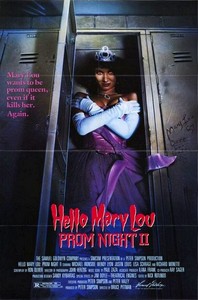 Mary Lou Maloney (Lisa Schrage) likes to play around a bit and, when she decides to dump her boyfriend Bill Nordham (Steve Atkinson) for the affections of Buddy Cooper (Robert Lewis), Billy decides he's going to get revenge.  Grabbing a homemade stink bomb abandoned by some pranksters, he drops it on the stage just as Mary Lou comes up after being selected prom queen.  Rather than just stink the place up, the fuse catches her dress on fire, and she burns to death in front of the other attendees.

30 years later Vicki Carpenter (Wendy Lyon) is dating Craig Nordham (Louis Ferreira), Bill (Michael Ironside) is now principal of the school and Buddy Cooper is now Father Cooper (Richard Monette).  Vicki wants a new dress to go to the prom, but her tyrannical, ultra-religious mother (Judy Mahbey) forbids it.  So, instead of buying one, she goes looking in the prop room at school for something appropriate, and accidentally opens the box containing the prom queen's robe from 1957, but also the crown.  Not to mention she releases Mary Lou's spirit, who is out for revenge and decides to possess Vicki.

But first Mary Lou goes after Jess (Beth Gondek), who tries to pry one of the jewels from the crown.  Angered, Mary Lou attacks her and makes it look like a suicide.  Afterward, Vicki starts seeing hellish visions around the school and slowly begins to behave differently until finally Mary Lou takes over completely.  The bodies begin to pile up, and it becomes a race against time for Bill to end once and for all the evil that he created.

I went into this with vague memories of the original Prom Night with Jamie Lee Curtis.  Honestly, I'll have to see it again sometime, because I really don't remember much about it, other than I thought it was mediocre. I recently picked this up at a Goodwill, remembering the good recommendations it got back in the early '90s when it was a staple on video store shelves.  For some reason I missed it.

Now I wish I hadn't.  This has nothing to do with the original movie, which was a straight slasher (and more than a little of an attempt cash in on Curtis's fame after Halloween).  Instead, we have a vengeful, unstoppable ghost who can do almost anything and, if you know your '80s horror, that means going completely into the Nightmare on Elm Street realm, and this film bears more than a little resemblance to that series - only Mary Lou isn't content on hiding in dreams and very much wants to be a part of the real world.

There are a number of straight up creepy scenes (the cafeteria, the rocking horse) and the perfect '80s horror score by Paul Zaza.  So, forget how mediocre to bad the rest of the movies were; this should have come out under just the Hello Mary Lou title, and it is in every way a lost gem of the time.