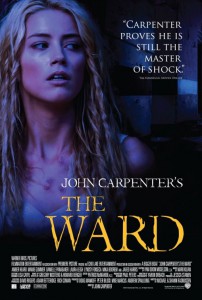 Kristen (Amber Heard) is arrested and remanded to the custody of the North Bend Mental Institution after she runs from her family and sets fire to an old farmhouse.  She is placed in a room previously inhabited by a girl named Tammy (Sali Sayler), who was murdered when a ghost entered her room.  Soon, Kristen is also being visited and attacked by the same ghost.

Sensing that something is wrong, she tries to protect the other girls, artist Iris (Lyndsy Fonseca), joker Emily (Marnie Gummer), nymphomaniac Sarah (Danielle Panabaker) and perpetually frightened Zoey (Laura-Leigh) from the ghost as it becomes apparent to her that it has been picking off girls in the ward they are staying in.  Her attempts to find answers to who the ghost is and why it is trying to murder them are constantly thwarted, both by the girls themselves and by the staff, including Dr. Stringer (Jared Harris), who is treating them but seems to know more than he wants to reveal.

After Iris disappears just as she appears to be ready to be released, Kristen attempts to escape with Emily, only to be thwarted by the ghost at the last moment.  After further prodding, Kristen is able to get the truth from Zoey: the ghost is that of Alice Hudson (Mika Boorem), who was abusive to the other girls in the ward and, under Tammy's guidance, was murdered in the room in which Kristen is staying.

Sarah's eventual disappearance under similar circumstances and Emily's murder by the ghost in front of her and Zoey eventually convinces her to attempt another escape by pretending to hold Zoey hostage, but that fails as well.  Forced into a straitjacket, Kristen manages to get out of it with the aid of a loose bedspring and once again try to escape, eventually coming face-to-face with Alice herself.

It is nice to see John Carpenter directing again.  Neither Vampires nor Ghosts of Mars were good films, but Cigarette Burns, made for the Masters of Horror series on Showtime, showed promise that there was still some life in the old guy yet.  Happily, The Ward fulfills part of that promise, as the direction is wonderful.  There have been some comparisons to Dario Argento, but I find the whole thing way too cohesive for that comparison to stick.  Which is also where the problem comes in - this has been done many times before, although for the most part it is done better here.

Where the problems arise are not necessarily with Carpenter, but with the story itself.  He didn't right the script this time, nor did he compose the score (even the score is rather good - and probably the most Argentoesque element in the film).  That said, everything good the film has built up early on is thrown out the window with a stupid ending.  I kind of knew where it might be going, but I was hoping more for a twist along the lines of The Others rather than Shutter Island.

So, should you see it if you are a John Carpenter fan?  I would say yes, as this does make up for his preceding features and shows that he still knows how to make a good film.  For the casual horror film buff, though, this is nothing you haven't seen before.