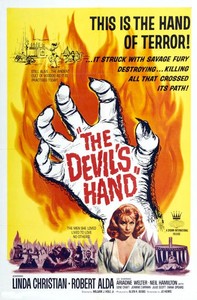 Rick Turner (Robert Alda) is set to marry his fiance Donna (Ariadna Welter).  Unfortunately, he's been having dreams about a blonde woman dancing before him, and they have been keeping him up at night.  While shopping, Rick sees a doll in the window of a shop that looks exactly like the woman he has been dreaming of.

When he enters, the shop's proprietor, Francis Lamont (Neil Hamilton) greets him by name and tells him that the doll is ready and even gives him the name of the person who modeled for it: Bianca Milan.  However, Rick does not remember ever being in the shop and purchasing the doll.  Even stranger, there is a doll that looks like Donna, and she gets the impression that Rick had that one made for her.  Lamont assures her this is not so, and they leave.  Shortly after, Lamont takes the doll that looks like Donna to an alter beneath his shop and sticks a pin in it, causing the real Donna great pain and landing her in the hospital.

While his fiance convalesces, Rick decides to find out more about Bianca (Linda Christian).  It turns out that she has been using a doll made in his likeness to communicate with him and lure him to her.  She turns out to be a member of a cult of the "devil god of evil" Gamba, a cult that just happens to be led by Lamont.  Rick decides that he wants to stay with Bianca and pledges himself to the cult.

Despite devoting his life to Gamba and the ways of evil, Rick still decides to seek some closure with Donna.  He sneaks into Lamont's shop and removes the pin, but Bianca has had her under observation and becomes suspicious when she recovers.  Rick tries to get Donna to leave town, but the cult has other ideas.

This is extremely low-budget '60s fare, so one may be tempted to skip over it.  Well, all I can say is, give it a chance.  It's no lost classic, and William J. Hole, Jr.'s direction feels like it is about 10 years out of date.  Still, the female leads are strong, Hamilton does well as the bad guy and Alda, though given little to do as the film's hero, is still solid.

If you are expecting Gamba to show up or anything to manifest itself in the form of a devil or his hand, then you will be disappointed.  The creepiest part of the movie has got to be the dolls that Lamont makes.  And, as for the cult itself, they are largely ineffective except and making some cash.  It largely feels like a mish-mash of voodoo stereotypes with some of the attitudes of LaVeyan Satanism thrown in (decide what you want and take it - the whole reason Bianca entices Rick).  Some people have tried to say there are deeper meanings here, like a conservative reaction against beatniks, but I don't think the people who made this movie thought further than to earn a few bucks.  And, if you look at it that way going in, I'm sure you'll enjoy it.