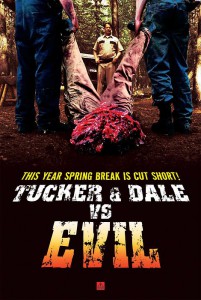 A group of college kids are headed out to the woods for the usual sex, beer and pot.  On the way they meet two of the locals, Tucker (Alan Tudyk) and Dale (Tyler Labine), who have just purchased an old cabin they intend on fixing up as a vacation home.  Dale is smitten by pretty blonde Allison (Katrina Bowden), and tries to talk to her.  Unfortunately, his nervousness is misinterpreted by her friends as hostility.

After getting settled in the guys go fishing.  The kids decide to go skinny dipping, and Allison, startled when she sees the two in their boat watching her undress, slips and falls into the water.  Concerned when she doesn't come up, Dale dives in and rescues her, telling the other kids that they have their friend.  Thinking that Allison is being kidnapped, they run off frightened and plan to get her back.

The next morning Allison wakes up to find that Dale is not creepy at all, but just awkward.  Tucker heads out to do some chores, and accidentally saws into a beehive while he's cutting up some old logs.  When he comes running around the corner of the cabin with the chainsaw, the college kids take off running once again - with one impaling himself on a log.  Chad (Jesse Moss), their leader, thinks that Tucker and Dale left the body there as a message, and plans a full-out attack, which goes completely wrong, and leads the two hillbillies thinking that the college kids are some kind of crazy suicide cult.  Also, Allison is accidentally knocked out again by Dale when he hits her with a shovel while trying to see what is going on.

The situation continues to escalate, with Chad beginning to relish his role as an avenging angel.  The kids kidnap Tucker, cutting off his fingers and hanging him from a tree.  Dale narrowly avoids a trap and rescues him, only to return to the cabin to find Chad and Naomi (Christie Laing) threatening Allison, thinking she has Stockholm  Syndrome.  Allison tries to work out the misunderstanding by serving tea and having Chad and Dale sit down and discuss their differences, only to have Chloe (Chelan Simmons) and Chuck (Travis Nelson) break in to try and rescue their friends.  Once again, everything goes wrong, and Tucker, Dale and Allison try to escape, but Dale runs the pickup into a tree.

Waking up, he finds Tucker injured and Allison taken to an old lumber mill by Chad.  It is up to Dale to rescue her from her former friend who is growing more and more unstable as time goes on.

As the October Horror Movie Challenge is drawing to a close, I was thinking of a Jean Rollin or Mario Bava film, but somehow stumbled across this.  I couldn't resist the premise of the usual college kids stuck in the woods with hillbillies premise being turned around.  Both Tudyk and Labine play their parts wonderfully, and I could probably watch another half dozen movies with these characters if director and cowriter Eli Craig could continue coming up with clever situations to put them in.  There are also a lot of little gags that I'm sure I missed, so this will be something I return to often.

That said, it is not meant to be a full-on horror film, but rather a bloody comedy.  It doesn't really try to go for the over-the-top gore like a lot of horror comedies do, but instead finds the humor in the situation.  Yes, there is still plenty of blood, but probably the worst is with the wood chipper.  You don't get anything like the lawnmower scene from Dead Alive.  For that, as much as I enjoy that type of humor, I was rather grateful.  It's about played out after all these years, and Tucker and Dale managed to come up with plenty of fresh situations from a tried and true formula.

Hopefully we'll see more from Craig as time goes on, and one can hope this isn't the last we hear from Tucker and Dale as well.