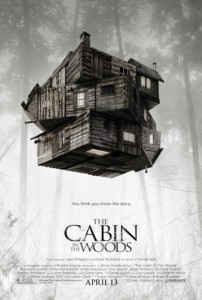 I managed to not have this movie spoiled for me this whole time.  It did take some effort. Happily, it paid off, so I'm not going to do my usual and write up a plot synopsis for you, as that would ruin the whole thing.

Yes, there are five college students in a cabin in the woods, as the trailer has you believe.  No, the movie they advertized is not the movie you get.  That's really all you need to know.

That said, Kristen Connelly is great in this (nice to see a redheaded protagonist), while Fran Kranz as the perpetually stoned conspiracy theorist Marty practically steals the show.  None of the characters are really the stereotypes they are meant to be, so it does make it a bit more interesting than most horror films.

I also love how the cabin in the movie is almost an exact replica of the one from the Evil Dead films, at least on the outside.

Absolutely great movie that should be seen by any horror fan.