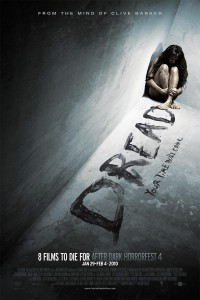 Stephen Grace (Jackson Rathbone) is taking a philosophy course as part of the requirement for his film major.  There he meets Quaid (Shaun Evans), who suggests doing a thesis on fear.  Taking a queue from The Kinsey Report, they interview a number of students on their greatest fears and most frightening points in life.  With the aid of Cheryl (Hanne Steen), Stephen's editor and love interest, the project comes together, and the three become close friends.

Problem is, Quaid is hiding quite a bit.  He has been on medication for years, suffering trauma from seeing his parents murdered by an axe-wielding psychopath when he was six years old.  He managed to escape, but fear of the killer's eventual return, and his reoccurring nightmares and hallucinations, drive him to take the study further than his partners originally intended.

After the study is over he begins mildly, attempting to make Stephen relive the fear that he could have been in the car with his brother at the time he died.  Failing to get the reaction he needed, he kidnaps Cheryl, a committed vegetarian due to abuse from her father who worked in a slaughterhouse, locking her in a room with nothing but water, a bucket and a piece of slowly rotting meat.  He tortures Abby (Laura Donnelly), a friend of Stephen's who is self-conscious about her birthmark, causing her to take drastic measures as well.

In an attempt to stop Quaid, Stephen takes drastic measures himself to force Quaid into a similar situation as he put others, but the results are not as he intended.

Dread is based on a Clive Barker short story.  I have not read that particular one (I'm also not the biggest Clive Barker fan, although movie adaptions of his works are usually interesting), but I do find some interest in reading it after seeing this film.  Anthony DiBlasi does a decent job of bringing the story to the screen, and some of the shots he gets, as well as some of the performances, are rather good for someone making his feature debut.  In fact, he does better than most of the experienced directors whose stuff I've had to endure lately.  Largely the actors acquit themselves well, particularly Shaun Evans and Laura Donnelly.

However, we have another movie where one of the biggest stumbling blocks is the soundtrack.  I do not know what it is about '00s horror films that they had to use the worst post-grunge, nu-metal and bad techno in their soundtracks.  Rarely does it evoke the emotions they want.  Instead, it seems like a cheap attempt to sell a soundtrack.  I miss horror soundtracks being appropriate to the movies.  It was often what added that touch to films by Dario Argento or John Carpenter, and it is about time young filmmakers start realizing this.