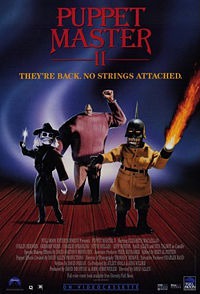 Andre Toulon's (Steve Welles) puppets are running out of juice, so they decide to use what they have left to resurrect him so he can make more.  Having harvested the brain matter from the surviving woman from the first movie at some point in the past, the puppets have begun attacking campers, locals and even animals to get the ingredients they need for the fluid that keeps them alive.

The Bodega Bay Inn itself has now become government property and, wanting to cleanse it of reported paranormal problems, a team of investigators are sent in: Carolyn (Elizabeth Maclellan), her brother Patrick (Greg Webb), tech guy Lance (Jeff Celentano) and his assistant (and lover) Wanda (Charlie Spradling).  They are later joined by psychic Camille (Nita Talbot), who soon after arriving comes to the smartest conclusion: leave.  However, before she can get out, the puppets attack her and drag her away.

The others think that she has left for town, and Carolyn calls Camille's son Michael (Collin Bernsen) to let him know.  Concerned, Michael shows up, and he and Carolyn start to bond.  Meanwhile, another visitor arrives: a man dressed in bandages, goggles and a 1930s get-up calling himself Eriquee Chaneé, and claiming that the inn was past on to him from the previous owner.  He announces that he will allow them to stay as long as they steer clear of his rooms.  Of course, Chaneé is none other than the resurrected Toulon.

Toulon continues to have the puppets gather fluid, promising that they will have another 50 years of life.  However, his affections have turned from his creations to Carolyn, whom he believes is the reincarnation of his dead wife Elsa.  Killing off Lance and Wanda, and attempting to do away with Michael, Toulon intends to transfer his and Carolyn's souls into human-sized puppets so that they may live forever.  As always, the puppets are not pleased with betrayal, and have plans of their own.

The first movie had some interesting parts, but for me this is where the story gets interesting.  Yes, in some ways it's a ripoff of the plot from the original The Mummy (it even has a flashback set in Cairo), but it is great fun.  This has some of the more exploitative moments one would have expected from the original, like the scene with the kid whipping his G.I. Joe, and, in a part that will stick out in most viewers' memories, it has Charlie Spradling in a very nice topless scene.

Also, this time David Allen, the man behind the special effects in the first film, takes the helm as director.  What this means is that the pacing is much quicker, the effects are better and there is a lot more time spent showing the puppets in action.

We also learn what happened to the survivors of the first one: Megan's brain was harvested for fluid, and Alex eventually ended up in an insane asylum.

This is a definite case of a sequel being better than the first part, and it is one of those Full Moon productions that, if you remember fondly, you won't be disappointed seeing again.