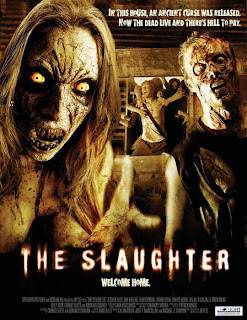 Madame Izriah (Eva Derrek) hopes to bring an unspeakable evil (Adriana Mejia) to earth, with the goal of controlling it for her own needs.  She fails, and the demon, refusing to be controlled, kills her and the other witches before the ritual can be completed.  However, the demon does want to reign over the earth, so she decides to wait things out a bit.

In the 1960s Julia Carter (Carmit Levité) inherits the house from her grandfather.  Upon spending the night, she begins to dream of the ritual and become concerned for her daughter (Cheyenne Ault).  Rightly so, because when she goes to check on her, she finds her daughter has been cut in half.  Fleeing the room, spectral hands grab her from below, causing her to become impaled on a hat rack (through her lady parts, no less).

40 years later real estate developer Carl (Brad Milne) has hired Tyler (Terry Erioski) and Dana (Jessica Custodio) to clean up the house and ready it for sale.  The two run a cleaning business on the side, and bring along Terry's adopted brother Iggy (Zak Kilberg) along with them.  From the start many of the crew do not get along, with musclehead Brandon (Travis Wood) freaking out every time someone so much as looks at his girlfriend Heather (Laura Sabbia) and Razz (Billy Beck) wanting to do nothing other than get high.  On top of it, Iggy's socialist rants are driving everyone crazy, and Carl's assistant Alexandra (Jen Alex) projects her dissatisfaction with life on everyone.

Into this happy get together comes both Julia's ghost and the She Demon.  While cleaning up the basement, Brandon finds two books, one bound in human skin an the other a translation by Madame Izriah of the parts needed to bring the demon into the world.  Iggy gets to work researching them and begins to work out that they are all in danger, especially after Julia attacks Carl (for a blood sacrifice) and Brandon and Heather have sex.  Next on the list are the four elements, with members dying off by earth, air, water and fire.  Finally, Carl is killed, "reversing death" - i.e., everyone is now a zombie.  Will Dana and Iggy be able to save the world from the She Demon and her legion of zombies?

Well, really, by the end, it doesn't matter.  A good portion of this film is enjoyable, with almost John Waters style script readings (and dialogue) and occasionally decent practical effects.  Some of the effects are done by rotoscoping and, unfortunately, whoever did it was just not that skilled.

It is obvious early on that this film isn't taking itself that seriously, and there are some genuinely funny parts in it.  However, this doesn't save it from ultimately being a forgettable mess.  Not much more to say other than pay attention when you're ordering from Netflix, so you don't get stuck with this when you're wanting to check out the excellent blacksploitation film starring Jim Brown.