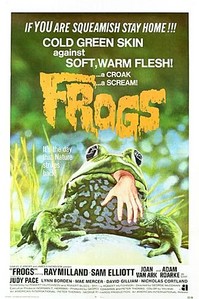 Pickett Smith (Sam Elliott) is a freelance photographer who is taking pictures for an upcoming story about pollution in the swamps of rural Florida.  While photographing some birds he is nearly run down by Clint Crockett (Adam Roarke) who is out boating on the lake with his sister Karen (Joan Van Ark).  Clint's carelessness causes Pickett's canoe to capsize, wrecking his equipment.  In consolation, he offers to bring him to his family's home on a large island in the lake.

The family is headed by the patriarch Jason Crockett (Ray Milland), whose birthday just happens to fall the next day - on July 4.  It turns out three of his kids also have July birthdays, so it is traditional for all the family to gather for an Independence Day celebration.  Of course, no one really gets along with anyone; Clint is a heavy drinker, Kenneth (Nicholas Cortland) has brought his black girlfriend Bella (Judy Pace) to rile up his grandfather, Michael (David Gilliam) is antisocial and Stuart (George Skaff), Jason's son-in-law, acts like a yes-man. In addition, they are all being kept awake at night by the constant croaking of frogs, which seem to have arrived on the island in abnormal numbers.

Jason, though not particularly welcoming, excepts Pickett's presence, and asks him to go find Grover, a man he sent out to spray poison.  Pickett does find Grover dead of a snakebite.  He returns and tells Jason, who informs him that he should keep it quiet until the celebration is over.

The next morning, however, things do not go as planned.  Michael is killed as he goes out to find why the phone lines are down, and Kenneth suffocates in the greenhouse due to poison being knocked off the shelves.  Soon Jason's daughter Iris (Hollis Martin) is lured off in a search for butterflies, and Stuart is dispatched while he searches for her.

Despite Pickett's warnings that everyone should leave, Jason refuses, even after his staff revolts.  He has Clint take them and Bella to the mainland, where they are attacked by birds and Clint's boat is set adrift after the mooring line is chewed through by monitor lizards - leading him to be killed as he swims for the boat.  His wife Jenny (Lynn Borden) rushes into the water to save him, only to be attacked by a snapping turtle.

Despite the deaths, Jason still refuses to leave, leaving Pickett, Karen and Clint's children to strike out on their own in the kayak to find safety.  Meanwhile, the local wildlife comes for Jason.

I know that the cover looks like it, but this is not another of American International's giant animal movies.  Instead, everything is just normal size.  It is just for reasons unknown the forces of nature have become a sort of hive mind and begun attacking humans.  Strangely, there is only one death by frogs.  For the most part they seem to stand as generals, guiding attacks by everything from lizards to spiders to alligators and even kudzu.

Sound absolutely silly?  Well, it is in spots, especially if you have owned reptiles and know that most of what you are seeing is harmless, including the snakes.  George McCowan makes up for this by filming many of the animals in closeup and using all other establishing shots to give one a sense from the very beginning that the swamp is an entity unto itself and the Crockett home little more than a temporary blemish.

The end could have been more satisfying, but a movie like this from AIP could have been so much worse.  As it stands, Frogs is a strange but entertaining film, which ended up spawning a whole line of movies about nature turning against man.