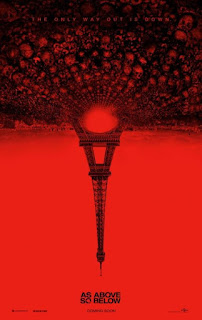 I was a bit nervous going into As Above, So Below.  It wasn't the plot or the fact that it's a found footage film, but because I couldn't remember if I had seen it.  It turns out I had not, but I had confused it with a movie called Catacombs, which I don't remember much about other than I really didn't like it. I was really hoping I didn't accidentally sit down to rewatch a movie I didn't like the first time around.
Even though it shares the same location I was relieved it was not the same movie.  The idea of being trapped in the dark and lost underground is an effective one, especially since the Paris catacombs do offer a sense of mystery, so I'm not surprised that this isn't the first movie to use that premise.  There is nothing really supernatural there, but that doesn't matter.  People have legitimately lost their lives due to getting lost in the dark, getting injured or just being stupid enough to go into areas that are not stable.  If one is going to watch a movie about the Paris catacombs this would be the superior one to watch, even though I still wouldn't say the film reaches the levels of greatness that it could have.
Scarlett (Perdita Weeks) is an archaeologist, among a number of other things, who is following in the footsteps of her late father.  Through his research he came to believe that the fabled Philosopher's Stone was real, and had been achieved by a French alchemist named Nicolas Flamel.  Scarlett aims to finish her father's search for the stone, and sneaks into Iran where, just before an underground chamber is blasted, finds what is called the Rose Key.  The Key provides translations to symbols on Flamel's tombstone that lead Scarlett to believe his true resting place, along with the stone, is in a secret chamber somewhere beneath Paris.
With her is a documentary film maker named Benji (Edwin Hodge) and an old friend named George (Ben Feldman) who she needs to help with translations, but who is also reluctant to follow her underground on her search.  With the help of guide Papillon (François Civil) and his friends Zed (Ali Marhyar) and Siouxie (Marion Lambert) they go in search of the chamber, although Papillon warns them that the area is a bad place that no one comes back from.  As they search for the stone they soon realize that the realm they have entered is far removed from the world above.
An irritation in most found footage films is that whoever is holding the camera never puts it down even when it would be logical to do so.  This situation is largely avoided by having everyone wearing cameras on their headlamps, and the main camera carried by Benji does get dropped and left behind at one point in a panic.  It's a lot more logical on this point than most movies of its type, although the conceit obviously simplifieds being able to negotiate the catacombs without a lot of extra gear.  Director John Erick Dowdle still had a piano and a car hauled down there, but some of the places the actors go would be difficult to get a full crew into.
Despite the format, the story in this case is pretty much what matters, and it does get pretty interesting as it goes along.  What starts out as a treasure hunt soon becomes a sparse retelling of the Inferno third of Dante's The Divine Comedy.  Largely it works, although there is a mysterious woman (Olivia Csiky Trnka) that shows up now and again and plays a role in the proceedings, but unfortunately is not explained in sufficient detail to have the emotional impact she should.  It is also a defect of the filming technique that certain details may be missed as things happen.  None-the-less, it entertained me due to the fact that one of my current horror obsessions (and writing obsessions as well) has to do with these types of situations where forgotten corridors lead outside of reality or connect to others.  It was one of the reasons I enjoyed Us and The Iron Rose so much.  In many ways As Above, So Below reminds me of the latter.
Perdita Weeks and Ben Feldman have some chemistry, although when it gets to the end and the romantic link is forced it doesn't work as well.  They're better as friends.  Happily, she was not as bad as I thought she would be, and, while I wouldn't say I fully believe her as a legitimate archaeologist, I do buy into her as an obsessed treasure hunter, even though there are reasons behind the obsession that have nothing to do with reputation or financial gain.  The other characters are largely horror movie fodder, and they die as the plot needs them to.
There is a good amount to recommend in this movie, although the enjoyment may be tempered by one's tolerance of the found footage format.  I think it wants to be a movie that has layers that invite multiple viewings, which in some ways it does, but there is not enough elements in the story to engage a viewer enough to want to revisit.
As Above, So Below (2014)
Time: 93 minutes
Starring: Perdita Weeks, Ben Feldman, Edwin Hodge, François Civil
Director: John Erick Dowdle