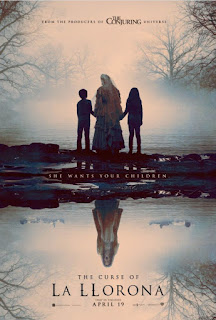 I live in the southwestern United States, and La Llorona is a tale most people in this part of the country know even if they aren't of Latin heritage.  La Llorona, or the Weeping Woman, is the spirit of a beautiful, well-to-do Mexican lady who had the perfect life until her husband was unfaithful.  In a fit of rage she drowned her sons, and then drowned herself.  Because of her sins she is forced to walk the Earth in search of her children, and will often take any that she finds.
When I first heard the tale it was similar to Bloody Mary - if you say her name three times in a mirror she will appear and attack.  The story I heard is that she would scratch with her finger nails rather than kill, but other versions speak of her luring children to their death by drowning or just making off with them. It's a rather effective ghost story.
I was decently excited to see that Hollywood had finally come around to making a movie about the legend.  I was less excited to find out it would be part of the Conjuring universe, since that series and its spinoffs are experiencing diminishing returns in quality.  Still, no matter how it turned out, it was pretty much something I had to see.
In 1973 Los Angeles Anna (Linda Cardellini) is a social worker who is forced to take away the children of Patricia Alvarez (Patricia Velasquez) when she finds them locked in a closet with signs of physical abuse.  The children do not want to leave, and their mother violently fights to keep them from being taken away. After a night in the care of a children's home they are discovered to have left the facility and drowned, and Patricia is the prime suspect.
When Anna goes to the scene of the drowning a mysterious woman in white (Marisol Ramirez) appears to her son Chris (Roman Christgau) and begins to stalk her family.  She soon figures out it is the fabled spirit of Mexican folklore, and enlists Rafael (Raymond Cruz), an ex-priest with expertise in the occult, to help rid her family of the vengeful ghost.
Father Perez (Tony Amendola), from the Annabelle movies, makes an appearance to give La Llorona's backstory and send the family on their way to Rafael, but otherwise most of the other trappings of this cinematic universe are absent.  That includes many of the thrills of seeing events build around the family or creative scares.  There is little here that develops other than ghost shows up, family fights ghost with the help of Latin magic and ghost goes away.  A sequel is teased, but doubt that will happen unless Cruz gets brought back for one of the other connecting films.
Performances are fine, but there is not really any sense that the family is in eminent danger.  I predicted the path of the movie, including the part where suspicion falls on Anna, from the start.  It's a horror movie on rails, just using a different folklore than in the past.  As for that, La Llorona could be any other ghost that has appeared in PG-13 horror.
That brings me to my last point; the rating may be R, but many of the PG-13 horror films contain more blood, violence or scares than this.  I don't know what the MPAA saw in this to give it that rating or if someone begged them for it just to get people to go see it.  Either way, The Cures of La Llorona was done quickly and cheaply, and does no justice to the tales on which it is based.
The Curse of La Llorona (2019)
Time: 93 minutes
Starring: Linda Cardellini, Roman Christgau, Jaynee-Lynn Kinchen, Raymond Cruz, Marisol Ramirez
Director: Michael Chaves