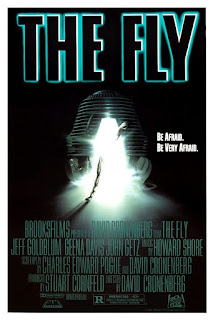 The Fly was one of those undeniable 1950s horror classics.  Starring David Hedison and Vincent Price, The Fly was about a man named Andre Delambre who invents a teleportation device, but things go wrong when he tries it on himself and a housefly gets into the machine.  The results may look a bit goofy now, but at the time the reveal of Delambre with the head and arm of a fly while the rest remained human was rather shocking - as was the ending, when we saw what happened to the housefly.
During the 1980s Charles Edward Pogue was asked to write a treatment for a remake of the '50s classic, and the script remained in development hell until none other than Mel Brooks agreed to produce it.  Eventually David Cronenberg, who had recently proved his ability to make a mainstream Hollywood horror film with his adaptation of Stephen King's The Dead Zone, was brought in to direct.  Cronenberg rewrote Pogue's script to fit his style and ideas.
Seth Brundle (Jeff Goldblum) is a scientist on the brink of solving the problem of teleportation.  While he has no problem with inanimate objects, living creatures are a different story.  After meeting a science journalist named Veronica Quaife (Geena Davis), the two eventually begin working out the problems together, much to the chagrin of her boss, and former boyfriend, Stathis Bors (John Getz).  Drunk and in a state of jealous rage, Seth throws caution to the wind after a successful teleportation of a baboon and goes into the machine himself.  Unfortunately, there is a literal fly in the ointment, and the result is his computer splicing their genetic structures
At first Brundle is amazed at his new strength and vitality, but as the days go on the insect part of him takes over, resulting in violent and and erratic behavior.  Veronica is anxious to find some way to save him, but it turns out the way to do so is much worse than she thinks.  She also finds out she is carrying his baby and fears what the results of that might entail.
David Cronenberg is known for "body horror," and many of his movies concern disease, both physical and mental, and in particular how one's body turns against them.  Because of its emphasis on the results of Brundle's experiments, The Fly was meant to not have a clear human antagonist.  Stathis is about as close as it gets, and he is creepy, stalking Veronica, showing up at her apartment uninvited and making sexually inappropriate comments whenever possible.  Despite the fact the two were previously an item he is the kind of boss that these days wouldn't just be laughed off, but would possibly be facing charges.  Still, even he finds some redemption in the end.  In Cronenberg's mind it is the ravages of time and disease that are the real enemies, and the melding of Seth with the fly accelerates the process.
Chris Walas does an amazing job bringing this to the screen.  Though at some points the rubber suit is a  bit obvious, most of the time the makeup is unnerving, beginning subtly as discoloration and lesions on the skin and working up to random pieces of Seth Brundle falling off.  It all leads up to the final transformation as most of Seth's humanity, at least on the outside, is stripped away.  Needless to say this is one of Jeff Goldblum's best roles as he goes from his usual twitchy scientist character to an obsessed madman.  A good portion of the movie requires him to act under layers of restricting, asymmetrical makeup, and he pulls it off.  Geena Davis is also wonderful, not breaking down into a typical damsel in distress but, despite his warnings, actually attempting to be there for him while trying to deal with her own personal issues.  The whole thing is tied up nicely with a great score from Howard Shore.
The Fly isn't all about gooey effects and monster images, but is instead focused on holding onto one's humanity as death inevitably approaches, as well as being able to rely on others as that time comes.  While it hits on a visceral level, it also hits on an emotional one as well.  While it wasn't outside of the norm for Cronenberg - in all honesty, The Dead Zone was more of an anomaly for him - it was for mainstream audiences.  It was still a major hit in 1986 despite all that, but most likely due to the fact that the themes Cronenberg wanted to explore are universal to all of us.
The Fly (1986)
Time: 96 minutes
Starring: Jeff Goldblum, Geena Davis, John Getz
Director: David Cronenberg