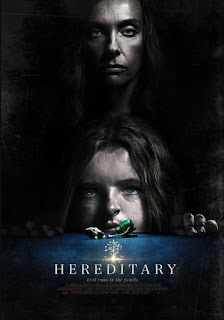 Everyone handles grief in different ways.  I have recently been asked how I am standing up to the losses I have suffered over the last year, and my reply is that I have a drive to keep going.  Truth is, the steps of grief are not something set in stone.  I go straight to acceptance, skipping all the other stages, and then figure out where to go from there.  I have seen others, though accepting what has happened, work their way through their grief in other ways.
But my grief, and that of many I know, is normal.  We're getting older and it is inevitable we are going to lose friends and family along the way.  Knowing this doesn't necessarily make it better, but knowing that we had time with these people does soften the blow.  There are those, however, who have had to confront loss from an early age, often before they had the tools to do deal with it.  Hereditary, deep down, explores what a life would be when it is really just a cycle of pain and loss.
Annie (Toni Collette) is confused about her feelings regarding her mother Ellen's (Kathleen Chalfant) passing.  She never felt close to her, but out of duty took her mom into her home as Ellen's mental state deteriorated.  Annie's father died when she was young, while her brother developed schizophrenia and killed himself.  It is hinted that Annie herself has had problems off and on as well, but has largely worked through them in her creation of miniatures.
While she deals with the mixed feelings of her mother's death further tragedy strikes the family that  causes divisions between her and her son Peter (Alex Wolff) and gives her husband Steve (Gabriel Byrne) cause to have concerns about her mental state.  This comes to a head when a lady named Joan (Ann Dowd) introduces Annie to a way of communicating with the dead, but rather than reaching who she intended it appears she has let a demonic entity into the already broken family.
This is writer and director Ari Aster's debut movie, and it originally was not meant to be a supernatural film at all.  His first horror film was intended to be Midsommar, while this was supposed to be a family drama exploring how everyone handles grief and how suffering does not necessarily make someone come out a better person at the end.  Along the way the supernatural elements were added, and though evident early on it takes a while for this part of the film to emerge and overtake the more realistic horrors of having to face the world when tragedy after tragedy hits.
Both Toni Collette and Alex Wolff, whose characters are often at odds with each other, bring the disconnect between them to life.  I don't know if all the dialogue was spoken as written, but incidences like Annie's explosion at the dinner table, if improvised or if flubbed, feel real.  Largely we don't rehearse what we want to say to people; if we did we probably wouldn't spend as much time apologizing.  Her outburst sounds like an argument any family may have when things come to a boiling point.  This hits home more than the majority of the other events that happen throughout Hereditary, save the central event that triggers much of the suffering and rage.
Steve may be on the outskirts of the family, but he tries to be the anchor, keeping both a steady income as well as trying to keep his wife on an even keel.  He is the one that is there for Peter the most when he has his breakdowns, and is also often the one looking out for their daughter Charlie (Milly Shapiro), who was her grandmother's favorite and seems to have an odd obsession with death.
This movie is more about emotions and family dynamics than it is about scares, but the supernatural element emerges stronger and stronger as the movie goes on.  I do find that ending of the movie a bit awkwardly pasted on, as if Aster felt he had to tie everything together so that the audience isn't left in the dark about what has occurred.  It's the only place where the film stumbles, making what should have been a haunting finale into a sudden exposition dump.  It's disappointing since up to this point Aster seems to have trusted his audience, and it feels as if he had to convince himself that adding the supernatural elements were the right things to do.
Hereditary is not a comfortable movie to sit through, not only due to it's major shock scene but because a good portion may be a bit too real.  Even the act of trying to contact the dead is an expression of grief that many have tried in order to get closure, so Annie's attempts to do so are not far out of the ordinary.  The movie ultimately takes patience to appreciate, something that seems to be in short supply with horror fans these days who don't understand there are more frightening things in the real world than in the imaginary.
Hereditary (2018)
Time: 127 minutes
Starring: Toni Collette, Alex Wolff, Milly Shapiro, Gabriel Byrne
Director: Ari Aster