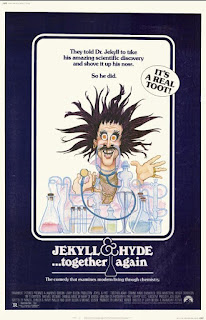 In the early 1980s ABC attempted to compete with NBC's Saturday Night Live by premiering their own skit show and airing it a day earlier.  Called Fridays!, it is now known these days less for the skits (which suffered from not having the writers SNL did) and for some of the musical acts they got to play on the show.  Still, after it ended, director Jerry Belson decided to try and do something with Fridays! cast member Mark Blankfield that had been done with a number of SNL alumni by this time: make him a star.
The early '80s were also known for a few other things.  Airplane! had become a huge hit, featuring a continuous stream of sight gags, puns and just completely outrageous humor.  Then, of course, there was cocaine.  Disco may have died, but the white powder that was part of the scene certainly didn't.  There are many films from this time that seem to have had nose candy as their inspiration, and Jekyll and Hyde... Together Again did more than pay a little homage to it.
Dr. Daniel Jekyll (Blankfield) is the best surgeon at Our Lady of Pain and Suffering Hospital, but he plans on giving up surgery to do research into drugs that could make surgery obsolete.  This does not go over well with Dr. Carew (Michael McGuire), the head of the hospital and Jekyll's future father-in-law.  Carew has promised millionaire Hubert Howes (Peter Brocco) a full transplant - meaning every organ - and only trusts Jekyll to perform it.  Part of his threat is to not let Jekyll wed his daughter Mary (Bess Armstrong) if he doesn't do the surgery.
Pursuing his own path, he is interrupted briefly to assist with a quick medical procedure for a singer named Ivy (Krista Errickson), who awakens suppressed sexual feelings within him.  These become un-suppressed after he falls asleep while working and accidentally ingests one of his experimental powders, which turns him into Mr. Hyde.  Rather than being a monstrous killer like previous Hydes, this one is a silver-toothed, gold-chain wearing party animal with an insatiable sexual appetite.
Largely the movie is a modernized parody of the 1931 Dr. Jekyll and Mr. Hyde starring Fredric March.  Many of the characters are the same, just updated.  Dr. Lanyon (Tim Thomerson) is a plastic surgeon, Ivy sings with a new wave band in a nightclub and Mary (instead of Millicent or Muriel) is still a spoiled daddy's girl.  Ironically, the movie was distributed through Paramount, which was responsible for the 1931 and 1920 versions of the story.  The times when it does decide to parody the original tale or older movies in general is where this movie often works.
Unfortunately, for the first half Jekyll and Hyde... Together Again attempts to emulate the style of humor from Airplane!.  Since no one in the committee that wrote this has the same talent as the Zucker brothers, most of the jokes fall flat.  It never gets as bad as Disaster Movie or Meet the Spartans, but little of it hits the mark until Hyde appears.  Once this happens Blankfield gets to do more physical comedy, which is what he is best at, and against all odds the movie improves, and even continues to do so as it goes along.  This doesn't mean all the humor translates that well these days - the gay and trans jokes certainly are a bit cringeworthy - but this seems to be the opposite of most of these type of "wacky" comedy films, which run out of steam about a half hour in.  In this case it appears they had a story and good ideas for the second half of the film, but had no idea what to do to get there.
For as raunchy a reputation this had back when I was in sixth grade, it really is pretty tame, even for 1982.  The only real nudity comes from a brief shot of Cassandra Peterson's nipple and the results of a breast enlargement gone wrong (or right, depending on one's preference on chest size).  The drug references are largely inferred, with Jekyll and Hyde both snorting copious amounts of the powder they cooked up, but never seen imbibing anything else.  Most of the sex is implied, or is largely just dirty talk, although it does lead to some of the better jokes.
I had not expected this to age that well and, honestly, it has not. But then neither have some of the jokes in Airplane! or The Kentucky Fried Movie, and both of those are still consistently funny despite how dated they are.  I had not seen Jekyll and Hyde... Together Again since the 1980s, and I only remembered two scenes out of it, but did remember that after having it hyped up so much that when that I was disappointed when I was old enough to see it.  I know there are many who view this as a sort of lost comedy classic, but my feelings are still the same as they were back then.  It is okay in parts, and once it gets going there is a lot to enjoy (including the musical number toward the end), but it fails to be as funny as it wants to be.  It also failed to make Mark Blankfield a household name, although he has found more success in writing and bit parts than he ever did as a lead man.
Jekyll and Hyde... Together Again (1982)
Time: 97 minutes
Starring: Mark Blankfield, Bess Armstrong, Krista Errickson, Tim Thomerson, Michael McGuire
Director: Jerry Belson