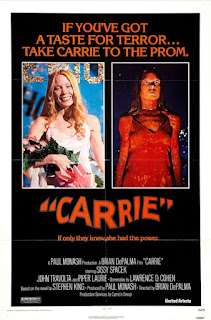 After years of rejections, an ex-schoolteacher from Maine listened to his wife and sent in the manuscript about a teenage girl with psychic powers who one day has enough of being pushed around and decides to no longer hide her abilities.  The novel, Carrie, was published in 1974 and was a modest seller in the pulp paperback market.  It was also the beginning of Stephen King's long writing career, with a novel his wife literally fished out of the trash leading to him becoming one of the best-selling authors of all time.
King sold the movie rights to Carrie for $2500.00, thinking that he was lucky at the time to get anything for it.  A screenplay was adapted by Lawrence D. Cohen, and a young film maker named Brian De Palma, a fan of Alfred Hitchcock and the director behind such movies as Sisters and Phantom of the Paradise, brought the story to the big screen.  The resulting film helped bring both men into the mainstream, with readers (and Hollywood) suddenly curious about what else this Stephen King guy had in him, and De Palma being hailed as one of the new breed of American directors.
The other key component to the movie was a young actress named Sissy Spacek.  Spacek was married to art director Jack Fisk, who worked with De Palma.  She embraced the character of Carrie White, the daughter of a religious fanatic and the target of ridicule from her fellow students and her teachers.  While not De Palma's first choice she eventually won him over, and her portrayal of Carrie jump started her acting career.  In addition De Palma brought veteran actress Piper Laurie out of retirement to play Carrie's mother Margaret, provided John Travolta his first major film role since he was cast in Welcome Back, Kotter and introduced us to such horror movie staples as Amy Irving, William Katt, Nancy Allen and P. J. Soles.
Carrie White is showering after a volleyball game when she has her first period.  Being 17, it's come quite late and her mother has never told her about it since she believes that it is a sign that her daughter has sinned.  The girls at her school mock her, resulting in Carrie having a major breakdown, and also resulting in the manifestation of latent psychokinetic powers.
Shamed by their gym teacher (Betty Buckley) for their treatment of Carrie, two girls decide to take care of their fellow student in different ways: Sue Snell (Irving) talks her boyfriend Tommy (Katt) into taking Carrie to the prom, while the vindictive Chris (Allen) plots with her boyfriend Billy (Travolta) to humiliate Carrie in front of the entire high school.  Little do they know that along with her powers Carrie's confidence has also began to grow, and she can be quite dangerous when provoked.
While this movie is generally known for the scene at the prom and the final confrontation with her mother, a good portion of the film is spent getting us familiar with Carrie White.  Her powers manifest here and there, but De Palma wisely holds back on giving us the full extent of what she can do.  When it does happen it is relentless, and the intensity has rarely been matched.  Part of that is because some of the minor characters weren't acting - there are fire hoses turned up to full blast, stunts that were untested until the day they were filmed and various other things that could have gone disastrously wrong.  The fear in many of the actors was real.  The effects, except for some of the miniatures of Carrie's house, still look great today.
Despite Carrie being an undeniably great movie there are two problems that are just too big to escape notice.  One is John Travolta.  He is top billed due to being known for his television role, but Billy Nolan is a minor character in the movie.  That is a good thing, because Travolta is absolutely awful.  Stephen King often writes characters like Billy Nolan as tough guys who are just one step away from prison most of their lives.  They are not just bullies, but pure full-on homicidal maniacs.  The movie version of Nolan just seems to be Travolta on cocaine, and not really much of a threat to anything except a poor pig.
The other problem is an extended scene of Tommy and his friends trying on tuxedos before the prom.  It's played for humor, seems completely out of place and, at one point, the whole thing is sped up, complete with fast-forwarded voices.  I have no idea what Brian De Palma was thinking.  It may have fit into a a teen comedy but doesn't work in a horror film.  Luckily, Sissy Spacek and Piper Laurie's performances both outshine everything else.
Carrie got its share of ripoffs, including a television movie that practically mimicked it line by line.  Even De Palma decided to go on with the whole psychic thing, following Carrie with The Fury two years later.  As for Stephen King, he has said that he likes the movie better than his book, and is grateful that it helped launch his budding writing career at a time when it was do or die for him.  All these years later - with remakes and copycats - De Palma's movie, as stuck in the '70s as it is and with warts and all - is still unquestionably one of the greatest horror films of all time.
Carrie (1976)
Time: 98 minutes
Starring: Sissy Spacek, Piper Laurie, William Katt, Amy Irving, Nancy Allen, Betty Buckley, John Travolta
Director: Brian De Palma