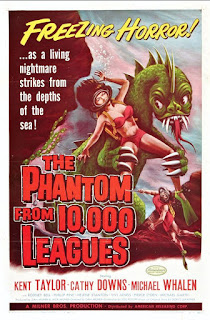 Somewhere in the multiverse there is a world where every old science fiction movie looks like its poster.  It doesn't matter if the movie has a great plot, wonderful acting or anything else, but has at least a scene where a giant underwater snake thing thing decides to snack on a scuba diver in a bikini.  Needless to say this does not happen at any time; in fact, there is more skin shown in the poster than the movie, and I wish the creature looked like that.  Given the budget of this 1950s science fiction thriller it is probably a good thing we got as much as we did.
Bodies are washing up on a beach in California, and locals are concerned that it has something to do with the Pacific College of Oceanography and its head scientist, Professor King (Michael Whalen).  As word gets around about the strange goings-on, noted scientist Dr. Ted Stevens (Kent Taylor) and government investigator George Thomas (Phillip Pine) show up to see what King might be up to, while the former also gets to romancing King's daughter Lois (Cathy Downs).  It turns out that the radiation burns, and the sea creature (Norma Hanson) reported, are in line with experiments Stevens had abandoned, but which may have influenced King's recent experiments.  Unfortunately, some other nefarious individuals see a way of weaponizing the discovery.
This is one of the early movies from American Releasing, which soon became American International.  Even though he's not credited for this, Samuel Z. Arkoff is involved as an executive producer, but this was largely the work of brothers Dan and Jack Milner, directing and producing respectively.  The script goes to great lengths to keep much of the action on the shore, rarely showing the featured creature which is largely concerned with guarding its glowing rock.
The movie is decently acted and everyone seems to be giving the old college try at attempting to at least take it seriously.  Unfortunately, a good part of the running time of this movie is spent discussing things happening rather than showing anything happening, so it makes for slow going for anyone who was at least hoping for hokey monster movie.  The good news is that this isn't like a lot of the 1950s cheapies where it was maybe 30 minutes of movie stuffed chocked full of stock footage.  There is some, but it doesn't take up the majority of the film.
Finally, the movie title is obviously supposed to get people thinking about 20,000 Leagues Under the Sea, with this title only being half as ridiculous.  10000 leagues is approximately 34523 miles, about 10000 more than the circumference of the earth.  In truth, this is more The Creature Hanging Out About a Mile Off Shore and 20 Feet Down, Give or Take.  I guess my title didn't have the same ring to it.
The Phantom from 10,000 Leagues (1955)
Time: 81 minutes
Starring: Kent Taylor, Cathy Downs, Michael Whalen, Phillip Pine
Director: Dan Milner