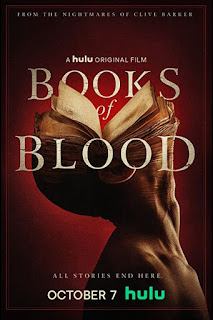 The Books of Blood, as the intro to this movie states, are a series of short story collections written by Clive Barker in the 1980s.  They have given us some of the most memorable movie versions of his work.  Hellraiser, which he directed, was adapted from "The Hellbound Heart", and "The Forbidden" provided the framework for Candyman.  A 2009 movie, Book of Blood, combined two of the other stories in the collection.
Director and writer Brannon Braga decided to go a different direction, combining three interconnected stories inspired by Barker's work instead of directly adapting new ones.  It was intended originally as a new anthology horror show, but Braga decided to just go ahead and make a movie from the material, giving Hulu something other than another Blumhouse movie to release around Halloween.
Jenna (Britt Robertson) is a troubled teenage girl who left college due to a breakdown, and has constant problems with misophonia, where sounds are an assault on her ears.  When she hears her mother (Paige Turco) discussing sending her back to a mental care facility, she decides to head out on her own.  On her way to Los Angeles she sees a man (Glenn Lefchak) following her, and decides to get off on a stop in a nameless town.  While there she finds a bed and breakfast inhabited by the seemingly idyllic couple of Ellie (Freda Foh Shen) and Sam (Nicholas Campbell), but things are not as they seem.
Secondly, we have a story that takes place in the early 1990s.  After her son Miles (Etienne Kellici) dies, Mary (Anna Friel) is contacted by a supposed psychic (Rafi Gavron) named Simon.  Mary has made a living of exposing frauds, but Simon initially appears to be the real thing - which he kind of is, whether he likes it or not.  Finally, back in modern times, there is Bennett (Yul Vasquez), who with his partner Steve (Andy McQueen) hopes to retrieve the fabled Book of Blood from a desolate, haunted area of town called Ravenwood.
The usual problem with anthology stories is that there are strong tales mixed with a thin framing device and usually one or two stories that are too short or go nowhere.  This is no exception, as the framing and the third tale mix together and do not provide much satisfaction other than they explain some things that happen in the first story.  While none of them are really treading any new ground - Jenna's story is reminiscent in ways of The People Under the Stairs, while "Miles" is a darker twist on Ghost - they are well-acted and don't waste time getting to where they want to be.  In fact, the movie itself doesn't overstay its welcome, and it is worth sticking with it for some twists that come near the end.
While I would say it is worth watching, the main drawback is that it was conceived as a show for a streaming service, and definitely remains so.  Brannon Braga is a seasoned television writer, director and producer, and was involved with the most of the Star Trek shows up to Enterprise as well as a number of other hit shows in both the United States and Canada.  He knows what he is doing in various genres, but he also has spent most of his career in television to the point that anything he touches tends to look like a television show even when trying to do a feature film.
The other problem is that Clive Barker fans will be disappointed that he didn't just go ahead and adapt some of the other stories in the Books of Blood series.  Barker's material can sometimes be difficult to interpret, but there are still many stories that would make for a good movie or part of an anthology series.  While Braga's stories aren't bad, they are not up to the quality of Barker's.  In addition, as much as I love the old anthology films, this is becoming more and more the norm these days, with a glut of similar horror films competing for each other.
Books of Blood (2020)
Time: 107 minutes
Starring: Britt Robertson, Freda Foh Shen, Nicholas Campbell, Anna Friel, Rafi Gavron, Yul Vasquez
Director: Brannon Braga