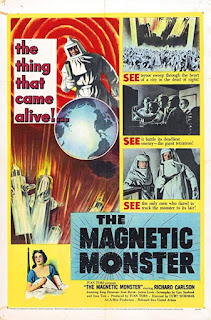 A major complaint I have about 1950s science fiction is that, once one gets beyond the obvious classics, there are hundreds if not thousands of films that were thrown together for no other reason than to have something to put on the Saturday matinee to entertain the kids while their parents shopped or got a little bit of alone time.  I have seen many that were little more than about 15 minutes of an actual directed and filmed movie stretched out to just over an hour by stock footage and narration.
The Magnetic Monster is unfortunately one of those.  Although Curt Siodmak is credited as director, most of the movie was assembled by Herbert L. Strock, and he didn't direct as much as he spliced the scenes Siodmak directed with military and police footage.  A good portion of the finale, supposedly a large atom collider called a Deltatron built under the ocean in Nova Scotia, is lifted from a German science fiction film from the 1930s.  It is as if Strock was hired to be the cinematic equivalent of a modern club DJ.  It is unfortunate that the movie had to be made the way it was, because it is well written and some research went into making it.
Dr. Jeffrey Stewart (Richard Carlson) is an investigator for the Office of Scientific Investigation, or OSI for short.  One of their so-called A-men, he and his partner Dr. Dan Forbes (King Donovan) are tasked with inspecting scientific anomalies and protecting humanity from the dangers of the new atomic age.  They are called into action when all the iron-based items in Simon's Hardware Store suddenly become magnetized.  It turns out that a scientist named Howard Denker (Leonard Mudie) had rented an office above the store to conduct experiments on his own.  While he succeeds in creating a new heavy earth element, his creation feeds on electromagnetic energy, doubling in size every time it does.  If left unchecked it will eventually pull the Earth out of its orbit.  Stewart and Forbes must find a way to make it inert.
With a title like The Magnetic Monster one would expect an actual rubber-suited monster that does magnetic things.  Instead, the monster is something developed by one man's hubris in tampering with nature, and threatens to do more damage to the world than a giant bug or lizard could do.  The movie itself plays out like a cross between Dragnet and Quatermass, and is quite entertaining despite some cheesy dialogue and over-reliance on stock footage.
Richard Carlson gives the required performance as the square-jawed scientist, while King Donovan works well as his partner.  There is chemistry between the two that could have continued into later films in the series, but Carlson was the one that continued on, both starring and directing (along with Strock) Riders to the Stars before directing his own series of science fiction films.  The Magnetic Monster forgoes the usual romantic subplot, instead giving us a few glimpses into the home life of Stewart and his wife Connie (Jean Byron).
Despite the cheap way the movie was put together it is still an interesting movie, if for nothing else due to its attempts to try something different and more realistic - at least with the scientific knowledge they had at the time.
The Magnetic Monster (1953)
Time: 76 minutes
Starring: Richard Carlson, King Donovan, Leonard Mudie, Jean Byron
Directors: Curt Siodmak, Herbert L. Strock