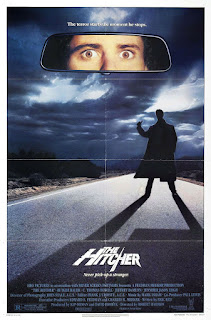 I have never understood hitchhiking.  I know my dad did it in the 1950s when on leave from the Navy to get back to Arizona - but he also took on a bunch of Canadian marines at one point and did some pool hustling.  Do as I say, not as I do, was a pretty good bit of advice from him, and he always drove home the point not to pick up hitchhikers no matter what.  As far back as Flannery O'Connor there were warnings about what would happen when hitchhiking, and The Texas Chain Saw Massacre made it clear what can happen when you pick the wrong one up.  It had certainly lost its romanticism by the time The Hitcher made it to the screen, and afterward it was pretty clear that this was a bad idea.
Jim Halsey (C. Thomas Howell) is transporting a Cadillac from Illinois to California.  While crossing Texas on a rainy night, and trying hard to stay awake, he picks up a hitchhiker (Rutger Hauer). He soon realizes his mistake when the man outright voices his intent to kill him.  He is eventually able to kick the guy out of his car, but that just leads to the mysterious stranger, who calls himself John Ryder, going on a killing spree which eventually Halsey is framed for.
It's a simple story, and there is a lot that happens that seems more like a dream than reality.  Ryder constantly shows up out of the blue in places and in ways that appear to bend reality.  He never voices a motive and, after Halsey escapes from him the first time, Ryder seems to want to give his quarry every chance to kill him.  He also seems hell bent on taking everything away from the young man, including a young lady named Nash (Jennifer Jason Leigh) whom he meets during his ordeal.
Despite a complete lack of logic in how the movie proceeds, three things work in this The Hitcher's  favor.  One is the direction; sweeping shots of the rural Texas, and a number of scenes that seem to be inspired by Mad Max 2 as the two play out their game on the road.  The second, of course, is Rutger Hauer, who emits a sense of menace from the first scene he is in.  By not giving Ryder any motivation or made-up moral code, nor any history of any type, it makes him feel like a supernatural figure without ever taking the step of explaining him away as a ghost or demon.  It's either clever or daft, but either way it works. The third element is that, brutal as the movie is, it holds back on what it shows, especially in one of it's most memorable scenes.
Although Nash is important in the plot, C. Thomas Howell and Jennifer Jason Leigh either don't have a lot of chemistry or don't have a lot of screen time together to build up that sort of bond.  Halsey is largely a blank slate, and though Howell does a good job of showing his transformation as he tries to survive, we really don't get to know him much more than Ryder, other than he is supposed to be the good guy.
It has its share of excitement and, for a movie made in the 1980s, sure plays like a '70s exploitation film.  I think the weirdness it has about it attests to its staying power, as it opens up the door for a number of speculations on just what Ryder is, whether he is just some anonymous guy who snapped or if he is some sort of thing Halsey made real.  It is a strange movie that has so many elements that have helped it overcome its nasty reputation from when it was originally released.  In the end, though it appears neatly wrapped up, it still leaves the viewer thinking something is majorly wrong, and that the world is slightly off-kilter.
The Hitcher (1986)
Time: 97 minutes
Starring: C. Thomas Howell, Rutger Hauer, Jennifer Jason Leigh
Director: Robert Harmon