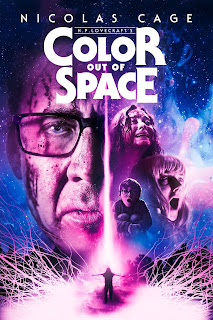 H. P. Lovecraft is one of my favorite authors, but as much as I love his work I understand why there have rarely been faithful adaptations of his material.  The closest was a modern silent short film of The Call of Cthulhu, which managed to do the story justice in about 25 minutes.  But therein lies the problem; like Edgar Allen Poe, Lovecraft's short fiction was meant to be read in one setting, had a simple set up and all led quickly to a conclusion that typically involves the protagonist going mad after seeing something indescribable.  When it comes to telling a visual story, indescribable is kind of difficult to represent.
When his work is adapted there is usually quite a bit added that Lovecraft generally would ignore, such as love interests and other subplots.  These are elements needed to keep a movie going beyond a half hour, and some directors have been better than others in bringing the stories to life.  Stuart Gordon was better than most, but even he stuck with reanimated corpses, mad scientists and sea monsters.  American International also attempted to make some Lovecraft movies to go along with their famous Edgar Allen Poe stories.
"The Colour Out of Space" has been attempted numerous times, most notably with the 1965 movie Die, Monster, Die, which starred Boris Karloff as a wheelchair-bound scientist experimenting with the rays from an alien spectrum produced by a meteorite that had fallen on his property.  But, understandably, it's a color - and one unknown to humanity.  The fact that neither the minds of  the characters nor readers can grip the color is part of the what makes the story disturbing.
Color Out of Space tries to modernize the story, with the meteorite falling on the property of an American family rather than that of a scientist, and largely keeps the original story intact.  Nathan Gardner (Nicholas Cage) has inherited the home of his grandfather and moved his family there to farm alpacas, but their situation is less than perfect.  His wife Theresa (Joely Richardson) is recovering from breast cancer, his son Benny (Brendan Myer) spends most of his time getting high with their hermit squatter Ezra (Tommy Chong) and their daughter Lavinia (Madeleine Arthur), between doing pagan rituals to heal her mother, is chomping at the bit to leave.  The only person besides Nathan that seems to like living in the middle of nowhere is the youngest son Jack (Julian Hilliard).
Lavinia may get her wish as a hydrologist named Zach Ward (Elliot Knight) is surveying the area for possibly building a dam.  Long before that can become a point of contention with Nathan something else arrives: a meteor spewing forth an alien color that slowly begins to take over the animals the surrounding vegetation, while affecting communications and, ultimately, the family themselves.
I admire director and writer Richard Stanley for largely sticking to the plot of the story, even if names were changed and other things were added.  This is Stanley's first movie since getting fired from The Island of Dr. Moreau, and it is not surprising that his visual style is still intact after all this time.  What does surprise me is that he by and large sticks with the story, without a lot of asides - except maybe for Chong's character.  He's not in it much, which is disappointing since he is more interesting than Nathan's kids.
My problem is that Stanley, rather than going off the deep end as he has been known to in movies like Hardware and Dust Devil, keeps things a little too normal.  We have the stoner teenager, the mopey teenager and the precocious kid.  They're all well-worn horror staples and, though we spend a lot of time with Lavinia, I never really felt any reason to care about what happened to her.  I don't know if this is because Madeleine Arthur is that bland of an actress or if the role was just that cliched.  Elliot Knight is set up to be the narrator, but he is hardly in it any more than Tommy Chong, so his role is largely pointless other than to call in the cavalry toward the end.  The standout performance is Nicholas Cage in full-on crazy mode, but that was because Stanley told him to act like he did in The Vampire's Kiss.
What happens is that what should have been a solid adaptation of the story just turns into an uninspired walk through various horror tropes, and not the best ones.  There are a few parts that got me, and I like the visuals toward the end.  Some of the effects are reminiscent of The Thing, and it would have been nice to see a bit more of that, but alas whenever anything interesting begins to happen I feel like suddenly Stanley snaps back to a character I couldn't care less about.
Richard Stanley is planning to adapt The Dunwich Horror next before moving on to another Lovecraft story, and I really hope that he decides to dwell on the atmosphere of dread with some amazing reveals toward the end, but this time if the stories are altered at least give us someone we can either root for or hate.  No one ever read Lovecraft for the family drama.
Color Out of Space (2019)
Time: 111 minutes
Starring: Nicholas Cage, Madeleine Arthur, Joely Richardson, Brendan Myer, Julian Hilliard, Elliot Knight
Director: Richard Stanley