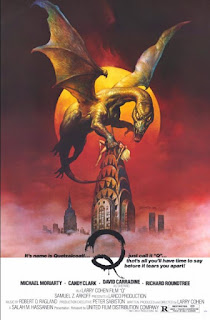 In 1982 Larry Cohen, famed for many of his low budget horror and crime films, was hired to helm a big-budget picture - an adaptation of Mickey Spillane's I, the Jury, featuring the classic detective character of Mike Hammer.  It was just the step that Cohen needed at the time, as many of his movies  had proven to be profitable, but he just never made that last leap into the mainstream.  He was a good choice, he wrote the screenplay, and it was about time he got some respect.  Then, due to creative differences with the producers, he was fired.
Stuck with a hotel room he was renting in New York, Cohen decided to make good use of his time.  In a period of six days he wrote a script based on an idea that had been rattling around in his head for years - the idea of a monster making a nest in the Chrysler Building - contacted his friend David Carradine to star in it, as well as frequent collaborator Michael Moriarty.  By October of1982 Q had hit the theaters.
Consequently, so did I, the Jury.  I am sure it was with no lack of satisfaction that Cohen watched the Mike Hammer movie tank as his low-budget monster film raked in the cash.
A number of people begin to disappear around Manhattan, with reports beginning to come in of some people seeing a giant bird.  While Detective Shepard (Carradine) investigates the disappearances, his colleague Powell (Richard Roundtree) is investigating a series of murders that appear to be ritual sacrifices.  Shepard soon becomes convinced that the two are connected, and that the creature they are dealing with is none other than the ancient Aztec god Quetzalcoatl.
On the other side of the law there is small-time crook Jimmy Quinn (Moriarty), who fled to the Chrysler building after a bungled diamond heist only to find a nest with a large egg surrounded by human remains.  At first he keeps the secret to himself, only telling his girlfriend Joan (Candy Clark), but when he is brought in for the heist and other charges he decides to use his information as a bargaining chip to stay out of jail and get rich at the same time.  What Jimmy doesn't know is that the cult of Quetzalcoatl isn't too happy with his interference.
For something that was thrown together at the last minute Q remains a fun watch even though its special effects looked outdated even in 1982.  The monster isn't in it much, which I often hear as a complaint against this movie, but I think that's a good thing.  It works up to the reveal (even if it is on the poster, in all its Boris Vallejo glory) and saves the big shots for when they are needed.  The problem with showing more of the monster is that all the focus would be on the effects, and it would be filled with unintentional hilarity rather than being the decidedly tongue-in-cheek movie it is.
Instead of ending up with scientists wanting to preserve the monster or some kid in short pants communicating with it, we have Michael Moriarty giving a tour-de-force performance as Jimmy.  His body language, manner of speaking and barely comprehensible thought process makes him a unique character, and is far away from the square-jawed hero from the 1950s.  Both Cohen and Moriarty could have just made it a one-note stereotype, but somehow Jimmy ends up being more memorable than the monster itself.  While the scenes with the NYPD battling a giant winged serpent are definitely memorable, nothing can top Moriarty's performance.
Cohen also makes up for the lack of showing a physical creature by using many point-of-view aerial shots of Manhattan as Quetzalcoatl stocks its victims.  When it does kill, we get the aftermath, and if I didn't know better I would swear Cohen just flew over Manhattan in a helicopter dropping fake body parts and dripping blood on people to get reactions.  It has much the same documentary feel when it comes to the action as his earlier movie God Told Me To.  For a good portion of the beginning of the film, until we meet Jimmy, the camera barely slows down, making us not merely an observer but part of what is going on.  It has always been one of Cohen's techniques that I have admired.
While the other end of the movie, involving the ritual sacrifices that tie into the creature's appearance, is not as developed as it should be after the general importance it is given earlier in the film - in fact, it is largely a build-up to make a joke at the expense of a typical horror film trope - it is nice to see Richard Roundtree getting to do something other than Shaft, and David Carradine obviously is having fun helping his old friend out with his monster movie.
Q did make quite a bit of money but Cohen, as usual, went right along trucking with his crime and horror films (The Stuff being his next film of note), although he would retired from directing within the decade.  Although it's not as famous as some of his others, Q still one of his best.
Q (1982)
Time: 93 minutes
Starring: David Carradine, Michael Moriarty, Richard Roundtree, Candy Clark
Director: Larry Cohen