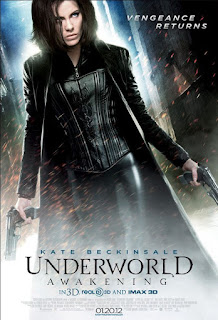 I really did not expect the Underworld series to continue after Underworld: Rise of the Lycans.  The main story was pretty much wrapped up after the first two movies, and the third was both a prequel and a coda.  There weren't any loose ends left, and it wasn't a blockbuster hit like the first two.  Sure, there was no guarantee of Selene and Michael living happily ever after, but the Vampire elders of their coven were gone and the remaining Lycans didn't seem to care one way or the other about what happened to the two of them.  They were both outcasts, but Selene also wasn't stuck worrying about scurrying home before sunrise, so living among humans was probably going to be best for both of them.
Someone, however, thought that there might be a few more dollars to squeeze out of the series.  Len Wiseman obviously had other stuff he'd rather be doing, so he and John Hlavin banged out a screenplay and about 20 or so other people, including J. Michael Straczynski, added to it.  By the end there was no finished script when shooting started, and though the plot generally followed Wiseman's quite a bit was changed.  The film was not screened for critics, which is rarely a good sign, and it got dumped in a January release.  True, other films in the series came out around that time as well, but there was some reasoning behind making them whether the studio had faith or not.  Underworld: Awakening had all the signs that it was a write-off.
Without Alexander Corvinus behind the scenes cleaning up the mess resulting from the war between the Vampires and Lycans humans soon realize they exist.  The response is not taking sides with either, but eradicating both and trying to find ways to reverse the viruses that created both species.  The push to find a cure is led by Antigen, a company led by Dr. Jacob Lane (Stephen Rea).  Selene (Kate Beckinsale) and Michael both attempt to flee on Corvinus's ship, but are ultimately captured.
12 years later Selene is awakened and finds that she is seeing through the eyes of a Lycan/Vampire hybrid.  At first thinking it is Michael, it turns out to be Eve (India Eisley), a daughter that Selene was carrying at the time of her capture.  A hybrid like Michael, Antigen wants to euthanize her and use her genetic material as a vaccine.  With the help of the human Detective Sebastian (Michael Ealy) and David (Theo James), the son of a Vampire elder from another coven, Selene must fight to save her daughter from Lane's plans and stop a threat that the Vampires had thought was well in the past.
Underworld: Awakening was directed by the Swedish team of Mårs Mårlind and Björn Stein, thus leading to a switch of filming locations from Hungary to Sweden.  The city where the action takes place appears to be nominally American, although there wasn't much hiding that the original two films were taking place in Budapest and surrounding areas.  Making it more Western just confuses things, but this is probably due to the numerous rewrites of the script and someone forgetting that it's supposed to take place in Europe.  In addition there is a jarring change in style.  Gone are most of the gothic, and goth, trappings of the other films, including the stylish homages to older films.
This fourth movie, though unnecessary after the first three, is still enjoyable despite everything working against it.  It is the shortest one so far, stripped down to almost pure action, and introduces a number of new elements and villains.  This includes giant Lycans and a renewal of the age-old feud, which only went dormant due to the Cleansing by the humans.  Neither side has let a good genocide interrupt their hatred for each other.
Beckinsale is still great in the role, although it is obvious that some camera effects have been used to make it look like she hasn't aged in 9 years since the first one came out.  In some cases she's glowing about as much as Princess Leia in Rogue One.  Scott Speedman is only shown once, and that's in footage reused from Underworld: Evolution; otherwise, it's an obvious body double, filmed at a distance, in profile or from behind.  He's not really missed since both Theo James and Michael Ealy are perfectly capable of handling the costar roles and India Eisley, as Selen's hybrid daughter, gets to do all the hybrid things.  We even get a nice cameo from Charles Dance as David's father Thomas.
Underworld: Awakening may be the weakest of the Underworld movies up to this point, but it is still quite entertaining and much better than it had any right to be.  I honestly thought I would have more complaints, especially since trailers I have seen for this (and what little bit I may have seen at some point) reminded me more of Resident Evil than Underworld.  In honesty, much of the original script seemed to be too much of a knockoff of that other series.  I'm glad this still has the Underworld feel to it.
Underworld: Awakening (2012)
Time: 88 minutes
Starring: Kate Beckinsale, India Eisley, Michael Ealy, Theo James, Stephen Rea
Directors: Mårs Mårlind, Björn Stein