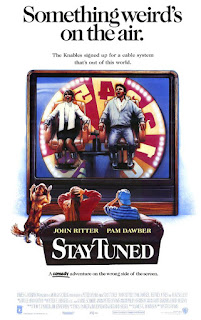 One of the most interesting things for me is when a movie I saw at some point, and largely forgot about, starts being discussed as an underrated classic.  I saw a lot of movies in the early 1990s, often seeing most of what came out each week if it was feasible to do so.  My poor girlfriend at the time got dragged to many of them, and I'm sure that, like me, she's forgotten a majority of what we saw.
Stay Tuned had an interesting premise, and it had John Ritter and Pam Dawber.  If a movie is being made about people getting sucked into the television, that's a perfect pairing.  John Ritter played Jack Tripper on Three's Company, while Pam Dawber played the second half of Mork and Mindy.  Stay Tuned, which becomes quite clear when watching it now, was aimed at 20- and 30-somethings that had grown up with the shows.  It counted on us being able to chuckle in our ironic way that two people known largely for TV were being sucked into a TV.
That was about all I remembered of it.  I was disappointed after seeing it in the theater and, other than a great pun involving a show called Different Strokes, I forgot all about it.  That is, until recently, when I heard it talked about by people much younger than me who shouldn't get one bit of the movie at all.  Honestly, it was made for an audience in 1992, with jokes that were current for 1992, and music that was the same.  While there are references to older shows and movies throughout there is no escaping that one had to be there to understand most of it.
Roy (Ritter) and Helen Knable (Dawber) are going through some tough times.  While Helen's career is flourishing, Roy's is floundering.  Instead of doing anything about it, or even speaking with his wife, Roy instead escapes into television, watching everything to the point where he can quote the dialogue along with the movies he's watching.  One night Helen has enough and breaks the television, but soon Spike (Jeffrey Jones) shows up with a fancy set-up, a huge satellite dish and a new remote.  The thing Spike doesn't mention is that the network it picks up is Hell TV - and that Roy and Helen are about to become its newest stars.
I think part of the reason I didn't like Stay Tuned when it first came out is that it was marketed as a wacky comedy that parodied television.  While it does have a number of clips and puns surrounding movies and shows from the time, and many of them are quite clever, it's not meant to be a subversive anti-media satire.  There is a little of that in there, but it is at the level of the usual cutthroat boardroom politics.  The goal for Hell TV is souls, not ratings, since there is only one viewer the network is concerned about pleasing.  Surprisingly, and perhaps wisely, he never appears.
Instead we get Spike as the main villain, currently the head of programming.  It is a demon-eat-demon job, and he currently has a new guy named Pierce (Erik King) nipping at his heals while a former employee, Crowley (Eugene Levy) decides to get back at Spike by helping the Knables survive for the next 24 hours in order to get sent back to Earth.  Eventually they are also helped by their tech wizard son Darryl (David Tom) and teenage daughter Diane (Heather McComb).
In place of witty satire about media manipulation and the empty void of early '90s cable we instead have a chase through the channels of Hell, which include westerns, period dramas, game shows and cartoons.  Ritter and Dawber have great chemistry and work well together as a bickering couple that are willing to let their differences go in order to help each other survive.  The movie is a comedy adventure, more along the lines of something like Honey, I Shrunk the Kids.
Was it as disappointing as I remembered it?  Not at all.  Stay Tuned is quite a good movie and, even though there are not a ton of outright guffaws, there were some scenes that truly got laughing.  Much of the humor is quite dry, which I appreciate, but it is important to note that this is more plot driven than just trying to set up jokes.  If it would have been marketed more as the adventure story it is I think it would have done better, especially since everyone is giving a strong performance.
It does have a number of problems with pacing or trying to pander too much to Generation X in places; for instance, the video sequence with Salt-N-Pepa goes on way too long, and it really makes no sense for them to be performing in Hell.  As always, watching anything with Jeffrey Jones is is a bit sickening, being that he's a known pedophile.  His behavior has ruined his often great bad guy performances from the  '80s and '90s comedies, including this one.
I would recommend Stay Tuned to people my age who never got to see it when it came out, or are curious enough to give it another watch.  As for anyone younger - well, it depends on how much they watch TV Land.  We grew up with both our own shows we watched as well as the reruns of our parents' shows, something that doesn't really happen anymore unless someone gets curious and wants to watch them.  I would definitely say check it out if curious, but be prepared for the fact that it is a movie stuck in a specific period of time, which is a barrier in some ways to getting into it.
Stay Tuned (1992)
Time: 88 minutes
Starring: John Ritter, Pam Dawber, David Tom, Heather McComb, Jeffrey Jones, Eugene Levy, Erik King
Director: Peter Hyams