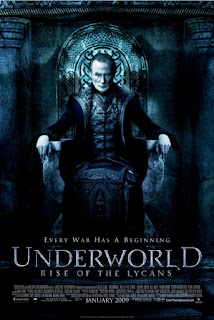 Those who truly hate the Underworld series seem to do it with an unbridled passion.  This, not surprisingly, incudes many critics, to whom it seems the very existence of these films is a personal affront.  Len Wiseman, admittedly, is a commercial film maker.  He produces, writes and directs properties that will turn a profit despite their artistic merits and, if they happen to have the latter, all the better.  In some ways he reminds me of Roger Corman, who suffered similarly with critics, but lacked an attractive wife to use as a lead actress.
Those of us who like these movies are certainly not fanatical about them.  Even the first one is silly, the plots rehashed from a number of previous films and stripped down to their base elements.  Still, Kate Beckinsale does more than just look good in leather; she adds an element of cool.  In addition, we get actors like Michael Sheen and Bill Nighy giving the movies some gravitas.
Wiseman wrapped up the original story with the second film.  Selene, having ingested the blood of Alexander Corvinus, gains the power needed to defeat Marcus and William, thus protecting the world for all three species.  In addition she gains the power to exist in daylight, and appears to go off to live whatever type of life she will with the Lycan/Vampire hybrid Michael.  Both films made money, and they complement each other without simply retreading the same story.
That brings me to the third movie, Underworld: Rise of the Lycans.  The first two maintained a certain atmosphere and had some great creature effects, largely headed up by Patrick Tatopoulos.  Rise of the Lycans, though savaged by critics like the others, was largely a treat for the fans of the first two, and it  lets Tatopoulos take over in the director's chair.  It also gives us the background story of how the feud between the two races began.
Viktor (Bill Nighy) is the Elder awake at the time, and he and his coven rule a significant portion of Hungary.  The human nobles pay tribute to him and provide him human slaves, but they are becoming restless due to his failure to protect them from the wild Lycans that are running free in the wilderness.  He is being pressured to allow Lucian (Michael Sheen), the first Lycan born that could change back to human form, and the one behind the variant of the infection that the Vampires use to change humans into Lycan slaves, to be released to help stop the menace.
Lucian, on his end, is having a secret affair with Viktor's daughter Sonja (Rhona Mitra), one which is discovered by the Vampires' librarian Tannis (Steven Mackintosh).  Fearing Viktor's wrath, Tannis holds back the information, and eventually allies with the two, but Viktor soon finds out what is happening.  Lucian, aided by Tannis and other Lycans, escapes and leads a full-scale revolution against the Vampires.
Rise of the Lycans is shot in similar manner to Evolution, with a large portion of the movie being influenced by the gothic black and white horror films of the past.  There are some other goth, rather than gothic, elements that creep in, with some of the Vampire concubines in ridiculously revealing outfits and late 2000s hairdos, but since this entire series seems to exist within its own little universe it's not anything worth dwelling on.  As can be predicted the creature effects, largely those of the Lycans, and the combination of practical and digital still looks great.
Since Marcus is asleep, we don't get to see him doing his bat thing, but Bill Nighy more than makes up with his over-the-top performance as the mercurial Viktor.  It's not all one note, however.  There is the feeling that he was similar as a human as he is a Vampire, with his soft spot being Sonja, and he eventually finds himself torn between what he considers his duty as a Vampire and his duty as a father.  Michael Sheen gives Lucian some real personality here, as the last time we saw him was just briefly in Underworld, and we get some real insight into why he would be powerful enough to be a threat to the Vampires themselves.  Rhona Mitra is also well suited as Viktor's daughter, and while she is a bit too much like Selene, that was the reason Viktor eventually rescues Selene after killing her family not long after the events in this film.
The further we get into the lore of Underworld the more it departs from its influences in favor of developing its own mythos.  Sonja may have been the result of a coupling between Viktor and a human, while Lucian is the son of a female Lycan of William's breed, but is born as human.  There are also many hints as it goes along that, despite the legends of Vampires being the undead, they are quite alive in this universe, though changed from normal humans.  Rise of the Lycans fills in many gaps in the story while raising more questions which, unfortunately, remain unanswered as the series returned back in the modern day when a new sequel showed up three years later.
While I think that the first two movies work well when viewed together, I do agree with a number of fans that say that Rise of the Lycans is the best of the three movies individually.  It is concerned with story and establishing history, but it doesn't skimp on the action, and it doesn't overstay its welcome.  It is everything that it should be, and one of the few times when a prequel felt like a necessary addition to a series.
Underworld: Rise of the Lycans (2009)
Time: 92 minutes
Starring: Michael Sheen, Rhona Mitra, Bill Nighy, Steven Mackintosh
Director: Patrick Tatopoulos