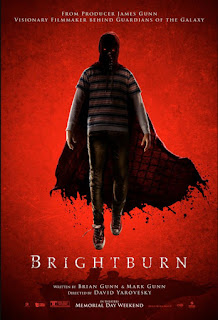 If there is one rule that is almost universally true when it comes to movies - and especially science fiction and horror - it is when "From the Producer Of" gets top billing it is a warning that the movie that you are about to watch is probably not going to be that good.  The producer, to put it simply, is one of the people putting up money for a project.  It's not like in the music industry where the producer is the guy working with the engineer and the artist, and is often intimately involved in the creation of the music.  That means when you see "From the Producer Of", and that producer is a famous director with a bunch of hot properties under his belt, this means most likely he owed a debt to a friend or family member.  It also means the movie studio doesn't think they can sell the movie without tricking people into thinking that it was made by someone with a lot more skill.
Such is the case with Brightburn.  James Gunn's name is all over this movie - until one looks closer and sees that the Gunns really involved are Mark and Brian, and the director is David Yarovesky.  It has familial obligation written all over it, with a bone tossed to a young guy who has done his time helping James Gunn with his films.  In the end the movie was not too bad, and it did make a little bit of its money back, so there may be better things down the line for everyone involved.  This still seems like James Gunn decided to loan some actors from The Guardians of the Galaxy and an assistant so that he could have some peace when Thanksgiving rolled around.
Kyle Breyer (David Denman) and his wife Tori (Elizabeth Banks) live on their farm in Brightburn, Kansas, and are trying hard to have a baby.  One night their dream comes true when one literally falls out of the sky.  Their life is idyllic until 12 years later when the spaceship he was transported in wakes up and significantly changes Brad Breyer's (Jackson A. Dunn) demeanor from a shy pre-teen to an almost invincible killing machine.
Brightburn aims to answer the question of, "What if Superman was evil?"  That question, already answered in greater detail and more effectively over two seasons of The Boys, boils down to a trail of death and destruction.  We get to view the origin of this, and a bit of what happens afterward, but little of it is satisfying.  None of the characters are too engaging - not even Brandon, who is the mopiest evil version of Superman they could find - and in typical slasher fashion they are there just to get knocked off.  It is as if Mark and Brian Gunn couldn't commit to full-on horror or dark fantasy, and pretty much bungled both.
Where the movie does shine in places are some of the effects, particularly some of the practical makeup effects.  It is also where, toward the end, it fails miserably, with a horrible CGI version of Brad flying.  It makes what is supposed to be a horrifying scene shocking in how shoddy it looks, as if we have suddenly retreated to the mid-1990s on computer effects.
Brightburn is not a terrible film, and probably would have been able to garner attention even without big names attached, but it is a hollow one.  The concept is interesting enough that a sequel, especially if there are other alien children as hinted in the end forming some sort of anti-Justice League, might be interesting and potentially better than this movie.  Then again, it may be as bad as the stuff DC has been churning out.
Brightburn (2019)
Time: 90 minutes
Starring: David Denman, Elizabeth Banks, Jackson A. Dunn
Director: David Yarovesky