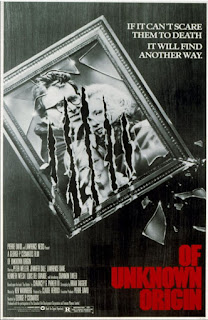 In the 1980s young professionals were obsessed with winning the "rat race."  That is, navigating the maze of hostile coworkers, career pitfalls and bad bosses to finally find the cheese at the end - that cheese being a cozy corner office and a guaranteed income to put away for retirement, and maybe just have a nice house and a couple of cars in the process.  If it sounds like an old concept, it is.  It was still very much alive at the time Of Unknown Origin was made (and when The Visitor, the book on which it was based, was written).
While another book - Who Moved My Cheese? - encapsulates what Generation X and later has had to go through, which has been much more frightening than dealing with a puppy-sized rat chewing its way through a brownstone, it's an important place to start when looking at this oddity of a film from George P. Cosmatos, the director behind the Sylvester Stallone movie Cobra as well as one of the best westerns ever - Tombstone.
This movie is also known as the first starring role of Peter Weller, who would follow this up with the cult science fiction film The Adventures of Buckaroo Bonzai Across the 8th Dimension, and a few years later his signature role in Robocop.  It also introduces us to Shannon Tweed, who was already well-known from the television show Falcon Crest.  While it now is held in some regard, particularly by Stephen King, it was a box office failure that was rediscovered when it hit cable.
Bart Hughes (Weller) has worked hard at a financial firm to take care of his family, trying to avoid the embarrassment of living off his father-in-law's dime.  His pride and joy, other than his wife (Tweed) and kid (Leif Anderson), is a Victorian brownstone home that he has been renovating by hand.  He is looking forward to a promotion if he can successfully do a reorganization of the institute's branches, and hopes to have some time while his family is visiting the in-laws.  Unfortunately, life has other plans, in the shape of large rat that decides to take up residence.
Bart's attempts to get rid of the rat start with traps, escalate to bigger traps, poison, a cat and then, toward the end, all-out war.  Meanwhile, the rat outsmarts him at every turn, launching sneak attacks and slowly destroying his life until its death becomes is one obsession.
Brian Taggert, in adapting the novel, infuses the movie with a good amount of dark humor, which is nice since most of the scares aren't handled that well.  The final fight is good, and Weller is fantastic as a mild-mannered man who can't stand the slightest mess having to suddenly meet violence with violence. There are a couple effective parts, one involving a toilet and two others involving dream sequences, but some of Cosmatos's filming just seems lifeless.  The humor keeps it afloat, and in some cases the the suspense does, too, but it needed far more.
While Tweed pops up here and there and the kid isn't bad, the only person other than Weller to get much screen time is Jennifer Dale as his colleague Lorrie.  There is an undercurrent of sexual tension between the two of them, but it's a subplot that really goes nowhere and just makes Bart look like a jerk.  It may be an example of how his battle with the rat is changing him, but it's handled awkwardly and never comes up again.
I still like the movie for what it is and it does have a great finale to it.  Mostly this is carried by Weller, and I think with anyone else it would not have been anywhere near as enjoyable as it is.
Of Unknown Origin (1983)
Time: 88 minutes
Starring: Peter Weller, Jennifer Dale, Shannon Tweed
Director: George P. Cosmatos