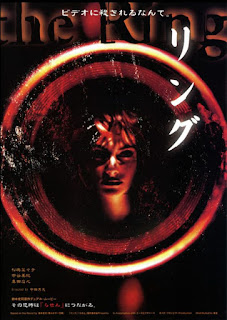 By now the Japanese ghost with the stringy hair drawn over her face has become a staple of horror.  It certainly was the go-to for a lot of Asian horror in the late '90s and early 2000s, and it soon caught on in the United States as well when Hollywood decided to put out The Ring, which was largely a remake of this 1998 version of the story.  Ringu itself was the second adaptation of Koji Suzuki's novel, the first being a television movie from 1995.  This, however, is the one that really made Sadako an international phenomenon.
It also proves that the United States doesn't have a monopoly on series creep when it comes to horror films.  This has had American and Korean adaptations, two direct sequels, another kind-of sequel with Spiral and then a whole set of remakes and knockoffs.  It is a non-stop barrage that I am rather reluctant to get into - worse than Ju-On, in fact.  But, after seeing the American version a long time ago, and this being one of the few Asian horror films where I never saw the original, I figured it was about time.
Reiko Asakawa (Nanako Matsushima) is a television reporter who becomes interested in an urban legend about a strange video tape where, if someone watches it, they will die within a week.  Her interest becomes personal after her niece Tomoko (Yuko Takeuchi) is among a number of high school students who all die at the same time after viewing the tape while staying at a lodge in Izu Province.  When visiting the lodge Reiko manages to get ahold of the tape and watches it, thus condemning herself.
In the week she has left she dedicates her time to finding out the origins of the tape and lifting the curse.  She enlists her ex-husband Ryuji (Hioryuki Sanada) to help her, and he himself has an incentive since he has only one more day than her to live after watching the copy of the tape she made for him.  What they find is a history of betrayal, strange medical experiments and murder that lead back to Oshima Island and vengeful spirit named Sadako (Rie Ino'o).
While it has horror elements, particularly in its set-up and toward the end, Ringu is largely a detective story.  In order to lift the curse Reiko and Ryuji must peel away the layers of the mystery that led to Sadako's murder and the creation of the tape.  Unlike an American film which would see this as an opportunity to bring the exes back together, the fact that they are forced to work together makes the reasons why they are no longer husband and wife clear.  Though Ryuji cares about her, he rarely treats Reiko with any respect, and seems to care more about his survival than hers.
I wouldn't really say that director Hideo Nakata has any specific style, although I really like his shots of the ocean and Oshima.  The video itself is sufficiently creepy, and the one big sequence toward the end is one of those memorable horror scenes that never gets old.  He did well enough to make a decent living off this series and other similar movies, and even directed the sequel to the American version.
Despite this being the granddaddy (or grandmother?) of all the Asian ghost movies, I still enjoy a number of the movies that were inspired by this more.  Sadako has an interesting backstory, but there is only so much one can do.  A number of Thai and Korean films took the concept, added their own spin and often came up with ways of making the ideas surrounding this much more interesting.  Meanwhile, in Japan, there were films that went the other way, putting the ghosts in the background and playing off the idea of everyday objects we use suddenly becoming evil or turning against us, such as Takashi Miike's One Missed Call.
Ringu is still an interesting and, at times, creepy thriller, although if Sadako wanted to kill these days she would be rather disappointed by being left in a pile of tapes in the attic or sitting in a box at a thrift store.  I'm sure that the current ones have found some way of making her more modern, but I think the VHS angle is even a little more strange after so much time removed from when they were popular.  It is a bit of a throwback to a time when the littlest things could still scare us.
Ringu (1998)
Time: 96 minutes
Starring: Nanako Matsushima, Hioryuki Sanada, Rie Ino'o, Rikiya Otaka
Director: Hideo Nakata