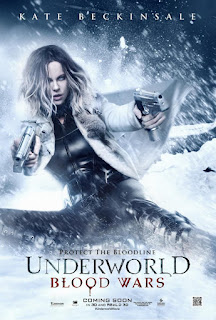 The Underworld series has gone the usual horror movie route of semi-famous director to guy who helped out on the films to guys hoping to make their big Hollywood break and, with Blood Wars, to general unknown that usually works on television shows.  By now I should be screaming my head off about a decent series stomped into the ground through too many sequels and neglect, with the intent to wring out every last cent from its good name, and wondering who this stuff is still being made for.  But, then, I keep expecting the next Underworld movie to be the one that puts the nail in the coffin, and I keep getting a surprise.
While the humans are now quite aware that Vampires and Lycans exist, it seems that most are satisfied that they are pretty much wiped out or at least not a threat any longer.  Antigen, the big company behind the Cleansing, turned out to be overrun by Lycans.  While Selene (Kate Beckinsale) is able to rescue Eve, Michael mysteriously disappears from the facility.
Blood Wars, following the pattern of many of the Underworld films, starts not too long after the events of Underworld: Awakening.  Selene is on the run once again from both clans, but they want her alive this time.  It turns out the Lycans have regrouped under a leader named Marius (Tobias Menzies), who has been able to organize them in a way no one has since Lucius.  On the other end the current Vampire Council has convened at the Eastern stronghold, a supposedly impenetrable fortress, and are concerned that Marius is preparing an attack.  While David (Theo James) is back again by Selene's side, her daughter has hidden herself away without giving knowledge of her whereabouts to her mother.  That's a good thing because the Lycans want her for her blood, while Semira (Lara Pulver), a member of the council, wants Selene for the same.  As the Lycan threat grows Selene and David must do what they can to protect the last of their kind.
Like the other movies in the series we are given an entirely new piece story and the world that it takes place in.  We are introduced to a separate remote Vampire coven led by Vidar (Peter Andersson) in the northern part of Europe, many of whom have discovered powers the other covens haven't.  We also find out more about who David is, and as always we are waist-deep in Vampire politics.  It does try to pack a lot into a short running time, and if there is any major complaint it's that this is a movie that needed be longer.
Anna Foerster's directing isn't anything spectacular; in fact, she has a bad habit of cutting from one shot to another too quickly, which annoys me in action films.  There is nothing to distinguish her style, which is probably what Len Wiseman wanted so that it didn't change the feel of the series too much.  If anything it is closer in style to the first three films, and less sleekly modern than Awakening.
Charles Dance is back as Thomas, giving a longer performance as well as adding quite a bit to the story we already know.  Tobias Menzies is imposing as Marius, but the character itself is dull.  Lara Pulver's Semira is much more interesting a villain.  Unfortunately, we again have too short a running time, and without the time to properly develop Marius it seems like adding Semira just creates too many diversions.
Len Wiseman is planning on producing one more of these films to wrap everything up, even though a number of questions from the last film are answered here.  It will be interesting to see how things turn out in the end, and if there is going to be more lore crammed in as we get to the ultimate finale it may be wise to start letting the movies stretch out a bit more.  Previously they only had as much story to tell as what we saw, but it is starting to feel like the series wants to end as a bit more than a silly action film.
Underworld: Blood Wars (2016)
Time: 91 minutes
Starring: Kate Beckinsale, Theo James, Tobias Menzies, Lara Pulver, Charles Dance
Director: Anna Foerster