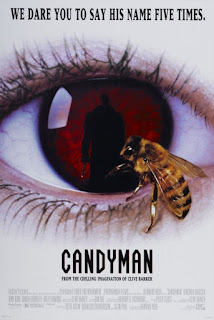 Horror films amuse and entertain me.  I often admire makeup and effects work to the occasional standout character, but despite the fact that "horror" is in the name of the genre, I never expect to be scared.  Occasionally I'll have a jump - like the end of Carrie, which still gets me no matter how many times I see it - but that's more a release of tension than a scare.  I sometimes am disturbed by the things I see, or by the end feel like I've been on thrill ride, but rarely does it get under my skin.  There have only been a few films that have made me feel uneasy after watching them, and that is largely because they featured plots and situations which could happen in real life.  Supernatural thrillers are not should not usually get to me, especially something as old fashioned as saying someone's name in a mirror to make them appear.
But suddenly I find myself, 20 years old and just spending the afternoon seeing a movie before work, cleaning out a bathroom that is covered in mirrors after seeing Candyman.  Heck if that didn't give me pause.  There is no reason for it, but I'll always remember that and associate it with this movie, and that feeling was enough to make this one of my favorite horror movies.  It also helps that the movie itself is so unique; knowing it was from a Clive Barker story, and with some of Candyman's dialogue in the trailer, I expected something closer to Hellraiser.  While some of his lines may have echoes of Pinhead, the two movies could not be more different.
Helen Lyle (Virginia Madsden) and her best friend Bernadette Walsh (Kasi Lemmons) are graduate students doing a thesis on urban legends.  In one interview she comes across a story she had not heard before about a creature called Candyman (Tony Todd), who when his name is spoken five times while gazing into a mirror will appear and kill the person who summoned him with the hook that is shoved in his right arm.  It turns out the legend itself centers around a black man, Daniel Robitaille, who was killed in the 1890s for impregnating a white woman, and was killed at the site of the infamous Cabrini-Green housing project in Chicago.  Eventually Helen takes the chance of summoning him and, while at first nothing happens, her life soon begins to spin out of control, as she finds herself accused of murder and abandoned by her faithless husband (Xander Berkeley).
Clive Barker's story, "The Forbidden", takes place at a council estate in Liverpool, and surprisingly the movie packed most of the characters and significant events into what we see on screen.  Director Bernard Rose decided to move it to Chicago, and even filmed in Cabrini-Green (which completed demolition in 2011), which at the time was controlled by local gang members whom he had to pay for protection.  The reason why it stood out for him is because of the fear people had of the place itself, as if just driving by it was potentially taking one's life in their own hands.  While Candyman is the supernatural character from Barker's story, right down to the same words he speaks to Helen in the story, his history is purely a creation of Rose,  who as the arrogant professor Archie gets to impart it to Helen, Bernadette and the audience.  While Candyman is more in the background for a good portion of the movie, Tony Todd's deep voice (with a good amount of processing) and imposing figure makes for a striking supernatural villain.
Cabrini-Green plays an imposing role throughout, and Rose also explores the idea that it is the belief in such beings that gives them life.  Initially, before other important information is revealed about their connection, he targets Helen simply because she has put doubt in the mind of the people who live there, starting with a young boy named Jake (Dejuan Guy).  Rather than revealing everything to Helen he gradually robs her of everything that she feels is good in her life to the point where she has to give in to him.  Virginia Madsden was in a number of horror and science fiction roles in the 1980s and 1990s, but understandably her lead role in Candyman is the one best remembered, largely for her portrayal of a woman spiraling into madness.
There are some traditional scares and gore effects, but Rose is more concerned about a general feeling of unease through use of Philip Glass's score to the repeated motifs of bees which, after being an instrument of his torture and death, fall under his control.  While the use of an incantation said into a mirror - hyped up in previews - is important to his legend, it doesn't become a central focus except when it needs to, which is wise since that conceit could have become cheesy rather quickly.
As can be expected there are some allusions to race, which figures heavily in the plot, but not in ways in which one would automatically assume.  Rose, not being an American, had more leeway in not being bound by as many stereotypes, but also by not being required to make grand gestures or speeches.  Instead he could portray things from an objective, outsider's point of view.  The role of Helen still contains a hint of the typical white savior role in the beginning (including having a black friend), but any notion of this is abandoned by the time Candyman himself shows up.
What was unfortunate about Candyman were its sequels, not set in Chicago and not directed by Bernard Rose, that attempted to turn Candyman into just another slasher character.  While Todd was still strong in the role, neither lived up to the first movie.  I am hoping that that Jordan Peele's sequel will finally give the character the continuation it deserves.
Candyman (1992)
Time: 99 minutes
Starring: Virginia Madsen, Tony Todd, Kasi Lemmons, Xander Berkeley
Director: Bernard Rose