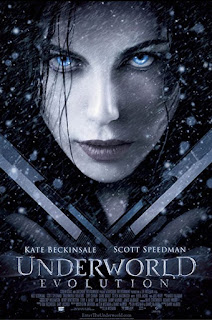 Underworld was a modestly budgeted film that owed a debt of gratitude to Blade as well as the short-lived television series Dark Angel.  What could have been just a vanity project for director Len Wiseman and his wife Kate Beckinsale had just enough style and over-the-top action to turn a hefty profit, so three years later we got a sequel.
At the end of the first movie Selene (Beckinsale) wakes Viktor (Bill Nighy) before his time, and learns that rather than Lycans slaughtering her family it was he and his Vampire army.  Michael Corvin (Scott Speedman), the last surviving descendent of Alexander Corvinus, whose two sons gave birth to the rival races, becomes a Lycan/Vampire hybrid.  Unfortunately, the first Vampire, Marcus Corvinus (Tony Curran), was also awakened.
Underworld: Evolution opens shortly afterward, with Marcus destroying the treacherous Kraven (Shane Brolly) and pursuing Selene.  He is not concerned with the fact that she slew Viktor, but the reason why Viktor killed her family - she is the only one alive who remembers where his brother William was imprisoned, and he intends to take the memory from her blood.  Selene and Michael rightfully are afraid that unleashing William will lead to an infestation of the original breed of Lycans, which could not switch back into human form and largely spent their time reproducing.  Aided by a shadowy figure (Dick Jacobi) who helps keep the war between the Lycans and Vampires from the eyes of the world, they attempt to stop Marcus before it is too late.
What I like about the Underworld series is that it does a good job of showing instead of telling.  We get the backstory of Marcus, Viktor and William before the credits, and then full on into the action with only the briefest of recaps.  While the first movie was filled with gothic style, this one is filmed as close to black and white as a color film could be and abandons decadence for straight-up monster action.  Marcus is the best of the bunch, being able to change form into a giant bat-like creature at will, and the chase involving Selene and Michael in a truck trying to escape Marcus is one of the best in the series.  The werewolf effects are great as well, with no two being the same and the transformations looking great, with a combination of practical and computer effects.
Like the other movies there are significant problems.  There is a sex scene early on between Selene and Michael that is unquestionably gratuitous.  However, Beckinsale decided at the last moment that she didn't want to show any naughty bits, resulting in it being laughably edited.  Also, Speedman, though he does do his hybrid act and help out a bit more in this film, is still pretty much just taking up space; it doesn't help that he was largely hired to look good and show off his abs rather than his acting ability.
I could go into the costume designers not even attempting to do period armor for the 13th century, but at the same time we have Vampires wielding crossbows that fire harpoons with silver chains attached.  Trying to go into historical accuracy or think seriously about any of this is not the point.  It is a trimmed-down supernatural action film and, like the first one, it works when it really should not.  It also pretty much finishes up the story of Selene and Michael, allowing for the series to go in a completely new direction for the third film without leaving the audience feeling cheated out of seeing what happens to their main heroes.
Underworld: Evolution (2006)
Time: 106 minutes
Starring: Kate Beckinsale, Scott Speedman, Tony Curran, Dick Jacobi
Director: Len Wiseman