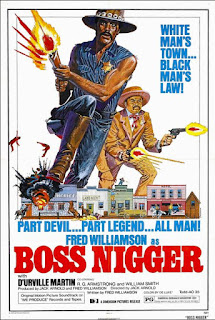 There are surprises I like and those that I don't like.  When it comes to movies, I like being surprised when something I didn't think was going to be all that special ends up being pretty good.  That was definitely what happened with this movie, as I was not expecting a blaxploitation Western that is somewhere between Django Unchained and Blazing Saddles.
The surprise I wasn't too happy about was that I believed I was about to watch a movie called Boss.  I knew the general plot, and figured it was going to be a cheap b-movie, but didn't think anything else about it - until the title screen came up.  While I understand it was the 1970s, there are just still certain titles I don't expect, and this was definitely one of them.  To boot, it's a PG-rated film, which makes sense because there isn't a whole lot of other swearing and the gunfights are largely bloodless.  Still, we're already into PG-13, if not R territory, in modern times for just speaking the title of the movie out loud.
Despite my reservations, I was committed, and glad I was.  It turns out it's a late career film by director Jack Arnold who, although he is known for his 1950s science fiction films like It Came from Outer Space and Tarantula, also did a number of Westerns.  In addition, it was written and produced by its star, Fred Williamson.
Boss (Williamson) and his compatriot Amos (D'Urville Martin) are ex-slaves that have taken up bounty hunting.  They are on the trail of a big payday by the name of Jed Clayton (William Smith), who is known to be operating around the town of San Miguel.  San Miguel is currently without a sheriff, something that Boss decides to remedy by appointing himself to the position over the objections of the town's mayor (R.G. Armstrong), who has a standing deal with Clayton to provide him what he needs as long as he leaves the citizens of San Miguel alone.
No one in town is pleased with their new law enforcement, particularly after Amos starts posting rules and regulations to force the white population to respect its new residents.  Jed Clayton is also none too pleased with the fact that his men are dying left and right.  With most of the town unwilling to do anything about the outlaws, it soon becomes the bounty hunters' reluctant duty to protect them.
While the plot is routine for a Western - reluctant heroes protecting a town whether the citizens want it or not - it is the chemistry between Fred Williamson and D'Urville Martin that makes this better than it should have been.  Part of the reason is because this is an unofficial sequel to The Legend of Nigger Charley and The Soul of Nigger Charley, with Martin playing the same character and Williamson doing so as well, just with the change of the name to Boss.  It is also played a bit more tongue-in-cheek, with a soul soundtrack and a lot of hijinks at the expense of the numerous racist townfolk they encounter.
No Western is complete without a good villain, and William Smith fills does his part.  Huge and muscular, he looks like one of the few people who realistically could take Williamson in a fight.  He also tends to not chew the scenery.  His danger comes from the fact that he is unpredictable and knows everyone around him is afraid, including his own crew.  He's like the guy that gets invited to the party that everyone fears, but they fear more of what happens when he doesn't get invited.  Williamson wrote him as a character that would realistically be running a gang, intelligent to a fault and not a cartoon.  On the opposite side is R.G. Armstrong, who as the mayor is both cowardly and creepy.
There are some problems here and there with the acting, particularly Barbara Leigh as the town's school teacher Miss Pruitt.  Her way of reading lines is barely above that of a fifth grade play.  She is supposed to be the white savior in the movie, but she is so wooden that it goes beyond laughable into just annoying territory.  It doesn't help that the script can't decide on if Boss should be with her or with Clara Mae (Carmen Howard), a young black woman he rescued from some of Clayton's men.
While it unfortunately came out shortly after Blazing Saddles, and thus can't escape being found inferior in comparison, there is still a lot here to enjoy.  If the movie had a different name it might have found a wider audience, and given us a bit more of these two in their roles.
Boss Nigger (1975)
Time: 87 minutes
Starring: Fred Williamson, D'Urville Martin, R.G. Armstrong, William Smith, Carmen Howard, Barbara Leigh
Director: Jack Arnold