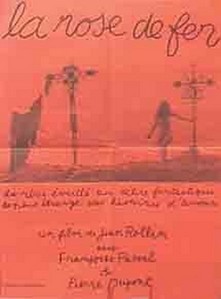 A young woman (Françoise Pascal) on a desolate beach finds an iron rose on a beach, which startles her into a flashback.  At a wedding reception, she meets a young man (Hugues Quester), and they decide to go on a ride together.  He convinces her to follow her into an old cemetery.  She is reluctant, but soon she finds herself following him down into a crypt for a bit of lovemaking.

Emerging, they find that they lost track of time and it is now night.  Heading back in the direction in which they believed they entered the cemetery, they find themselves repeatedly returning to the same place.  The young woman begins to panic, thinking that they are trapped forever.  After several attempts to find their way out, the two come to a building filled with the skeletons of children.

Accepting her fate, the young woman's panic ends, but the young man begins to grow more and more concerned.  Now not only is he trapped in a cemetery, but the woman has also appeared to have lost all vestiges of sanity, resulting in his life truly being in danger.

Jean Rollin is known for a number of strange, exploitatitve horror films such as The Living Dead Girl, and is also known for quite a bit of softcore and hardcore pornography throughout his career.  He is also mentioned often with Spanish director Jess Franco, as both dabbled in similar genres and had a large output of films, ranging from extraordinary to execrable.  To Rollin's credit, however, he did have higher aims than mechanically churning out anything he could.  The Iron Rose is proof of that.  Yes, it is imitative of better French and Italian directors, but it is still an interesting and provocative work with a number of different layers of meaning, from the obvious surface of accepting one's mortality to questions about whether existence itself is just a living death.

Both Pascal and Quester give great performances, and I am sure the most memorable part for most will be Pascal's nude dance on the beach (itself seeming to represent an afterlife of some sort).  Rollin filmed in several cemeteries, managing to give the illusion of a never ending world of graves and crypts completely removed from the rest of the world once night falls, and there is no dearth of atmosphere.