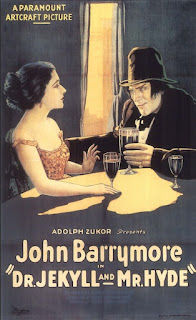 When Robert Louis Stevenson wrote The Strange Case of Dr. Jekyll and Mr. Hyde, I am sure he never imagined the sensation his novella would turn out to be.  As far back as the 1880s there were stage adaptations of the story, and there were a number of film versions as well once that industry got going.  Most of those are either lost or were early versions that condensed the story into just a few minutes; in fact, in 1920, when the John Barrymore version was released, there was another 40-minute production of the story in circulation.
The main weapon this feature-length version had was Barrymore himself.  Not merely a film actor, he was one of the most famous stage actors in the country, so getting him to star in the movie meant instant attention.  The fact that it was already such a popular story, and not looked at as a mere fright flick, gave it a bit more prestige - something that later retellings of this story have shared as well, as it has always been less about a monster and more about the clash between the two poles of human morality.  It may be stripped-down pop psychology, but it is effective.
Dr. Henry Jekyll (Barrymore) is a respected physician and scientist, although his colleague Dr. Lanyon (Charles Lane) thinks his explorations into what makes a human go too far.  On the opposite end his future father-in-law Sir George Carewe (Brandon Hurst) believes Jekyll doesn't know enough about the world and tries to get him to be a little less of a saint.  From this comes the germ of the idea of dividing the two selves so that Jekyll can act on his baser impulses without being morally responsible.
The result of his experimentation is a drug that changes him into a violent, immoral creature that he names Edward Hyde.  At first he is happy to live vicariously through Hyde, but the latter personality eventually begins to take over, and his pure evilness begins to affect Jekyll's friends and his potential fiancé Millicent (Martha Mansfield).
I have always admired directors from the early days of cinema for being able to come up with gold despite the limitations they had to endure.  John S. Robertson does a good job of giving a feel of different parts of London with limited sets as well as hampered with the fact that camera movement is limited.  Most of the scenes are from a stationary camera filming the action, but there is so much going on that it looks like more is happening than is.
The highlight, still, is John Barrymore.  There are some camera tricks with the transformation, and also a wonderful scene where Hyde, in spider form, takes over Jekyll while he sleeps.  Still, most of the transformation is handled through Barrymore's physical acting, contorting his body in a deformed, hunchbacked shaped as well as working his face muscles to show the metamorphosis before a quick cut allows the camera to return to Hyde in full makeup.
I like Hyde in this version best, as he is an amalgam of every stereotype of a person of low breeding in Victorian England - disheveled, dirty close, deformities - where often he has been portrayed as a throwback to a more primitive state or changing into a complete, inhuman monster.  Here he is quite human, driving home the fact that this part of Jekyll was alive and well even before his experiments brought him out.
While later versions included more elaborate sets, effects, transformations and what not, for the sheer terror that exists in man's soul that Stevenson was trying to portray this is one of the most effective screen versions of the story.  It is fortunate that this was not lost like so many other movies of its time, because, despite being a century old, it is still maintains the disturbing effect it wanted to project.
Dr. Jekyll and Mr. Hyde (1920)
Time: 69 minutes
Starring: Lionel Barrymore, Charles Lane, Brandon Hurst, Martha Mansfield
Director: John S. Robertson