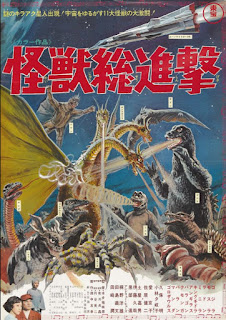 Ishiro Honda began working with famed Japanese director Akira Kurosawa, but his 1954 film Gojira largely sealed his fate as the father of kaiju films, and one of the best known directors in the genre.  He directed most of the sequels up to 1965's Invasion of Astro-Monster, as well as a number of other films ranging from science fiction like The Mysterians to the social dramas that defined his early career.  Jun Fukuda took over on 1966's Ebirah, Horror of the Deep, but by then the Godzilla franchise was starting to see a loss of interest in Japan and in the United States.  Destroy All Monsters was supposed to be a grand finale, bringing back Godzilla and his adopted son Minilla (from Son of Godzilla) as well as a variety of monsters from previous films.  Honda was also back, along with special effects from Eiji Tsuburaya and music from Akira Ifukube, the man responsible for the original Gojira soundtrack.
The other monsters along for the ride were Rodan, the larvae form of Mothra, Anguiras (from the first sequel, Godzilla Raids Again), Baragon (from Frankenstein Conquers the World), Kumonga (from Son of Godzilla), Manda (from the undersea adventure Atragon), Varan (who had his own film, Varan the Unbelievable) and Gorosaurus (from King Kong Escapes).  The three-headed dragon King Ghidorah shows up at the end as well to do the bidding of the alien invaders.  It is everything a 10-year-old watching television on Saturday morning could hope for.  As an adult, now being able to see it subtitled and originally as intended, it's even better.
All the above monsters are living together on Monsterland, a scientific research base in the Pacific.  It is toward the end of the 20th century and humanity has learned how to keep the creatures contained for study.  The United Nations has also established a moonbase which researchers frequently travel to and from.  The main rocket base is in Japan and the rocket, called SY-3, is commanded by Katsuo Yamabe (Akira Kubo).  His girlfriend, Kyoko Manabe (Yukiko Kobayashi) has just begun work on Monsterland when suddenly it goes dark.  The monsters are suddenly transported across the world, attacking major cities, while it appears that those that were on Monsterland are now, like the monsters, controlled by the alien Kilaaks.
The Kilaaks come from an asteroid and have advanced technology, which they agree to provide humans after certain adjustments are made to Earth.  The United Nations, now the head of the world government, objects, and Katsuo is tasked with helping to find out how the monsters are controlled and where from.  After freeing Kyoko from the Kilaaks' influence, it is discovered that the main control relay is on the moon, and Katsuo must destroy it so that the U.N. can bring the monsters back under human control and destroy the Kilaak base inside Mount Fuji.
Some of the plot is obviously a retread of Invasion of Astro-Monster, with a healthy bit of the plot of  Honda's 1960 science fiction film Battle in Outer Space thrown in for good measure.  Sadly, the destruction of the cities, except for when they get around to Tokyo, are kind of lackluster, despite such places as New York, Moscow and Paris being under attack.  The highlight is when the Kilaaks bring in Ghidorah as the ringer and the others attack and Godzilla, Anguiras and Gorosaurus get to work on him while Minilla cheers them on.
When it comes to the human side of the movie Destroy All Monsters understands what people are coming to see, and leaves out subplots involving criminal organizations or police investigations and the like.  There is also, thankfully, no little kid in short pants.  It's humans versus monsters for the first half, followed by monsters versus Kilaaks.  It seems like the monsters can be anywhere at any time, but I'm assuming that Kilaaks have some way of moving them around the world; how else can Godzilla be chewing on the Big Apple one moment and suddenly attacking boats in the Pacific Ocean the next?
The only thing Destroy All Monsters could have used was more shots of monsters doing their monster things.  Audiences flocked to this one and, instead of being the last kaiju movie as originally intended, it breathed new life into the genre, and the Godzilla films in particular, allowing them to continue into the early 1970s.
Destroy All Monsters (1968)
Time: 88 minutes
Starring: Akira Kubo, Jun Tazaki, Yukiko Kobayashi
Director: Ishiro Honda