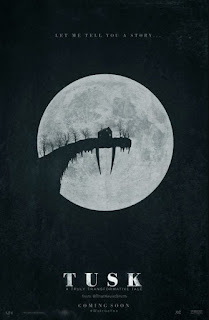 One of the classic Ren and Stimpy episodes, from the first season before they fired John Kricfalusi, is where the pair get a job as rubber nipple salesmen.  At one point they knock on the door of a talking horse who is dressed in rubber from the waist down, who states he doesn't have a use for rubber nipples, but wonders if they have any rubber walrus protectors.  He produces said walrus, who then begs them to call the police.

This is a movie for anyone who ever wanted to know what was going on behind the scenes.

Wallace Bryton (Justin Long) has a successful podcast with his friend Teddy (Haley Joel Osment) called the Not See Party.  Their idea is something along the line of the two describing things to each other for a funny result, as the other can not see what is happening.  One of the things that comes up is a boy from Winnipeg they dub the "Kill Bill Kid", as he sends them a video of him playing with a katana and accidentally cutting off his own leg.  Intrigued, Wallace decides to go Canada to interview the kid.

Despite his girlfriend Ally (Genesis Rodriguez) begging him to take her with him, he decides to go alone.  However, when he arrives, he finds that the boy has killed himself.  Angry at the kid and for upset at having spent a plane ticket for nothing, he decides to look around and see if he can find something worthwhile.  While relieving himself in a bar he finds a handbill posted from an old man promising tales of his adventures at sea.

Excited at having some material, he drives out to the man's isolated mansion to meet him.  It turns out to be a guy named Howard Howe (Michael Parks), who regales Wallace with stories about meeting Ernest Hemingway in World War II and hunting for great whites in the Arctic.  The latter story ends with how, when the ship went down, he was the only survivor.  Upon a barren rock he befriended a walrus he named Mr. Tusk, who kept him company until rescue arrived.

It is at this point that Wallace starts to get drowsy after drinking several cups of tea.  When he awakes he finds himself missing a leg.  Howard informs him that he passed out after being bitten by a brown recluse, and that Dr. Moussier, the local physician, had to make an emergency visit and remove the leg to prevent him dying.  He informs him that his phone was accidentally smashed by the doctor.  It takes a while for the drugs to wear off, but in the end it is what he suspects: Howard Howe has abducted him.  What he doesn't know is that the old man intends on making Wallace his new walrus pal.

While Howe is away, Wallace hears his phone ringing, and manages to call both Ally and Teddy and leave messages.  On the second message, he is knocked out by Howard, who then performs the surgery needed to fit him into the walrus suit: removal of some of his teeth and his tongue, severing his other leg and most of his arms, sewing him into a walrus suit made of human skin and then drilling two holes in his mouth in which he places tusks.  He is then placed in a special environment and fed raw fish, in an effort to turn him completely from man into a walrus.

Meanwhile, Ally and Teddy come to Manitoba in search of their friend, and are informed that the situation sounds like the M.O. of a serial killer being tracked down by Quebecois police inspector Guy LaPointe (Johnny Depp).  So far the man, going under a number of different identities, has killed at least 23 that are known.  By following his trail, largely helped by the negative impression Wallace left on the locals, they track him down.  We also learn that the truth about what happened to the original Mr. Tusk is much darker than originally thought, and it's a situation that Howe plans on reliving once again.

Kevin Smith has come a long way as a film maker since Clerks, even if learning how to become a technically better director has rarely meant that he could connect the same way with the audience as he did with his earlier movies.  The reason he still has as much of a following as he does, despite the unevenness of some of his films, is because he is a great entertainer.  On stage, on podcasts and almost everywhere but on film he has a personality that is bigger than the actual material that he releases.  This has become even more so since he has become a full-on marijuana advocate.  The good thing about smoking weed in the past was that ideas tended to be forgotten by the time the effects wear off; unfortunately, these days people tend to record them, and if you have enough friends and enough money they get made into a movie.

That said, when it comes to shooting a movie, Tusk is probably the best Smith has done.  It looks great, the action scenes are well done, and the story, bizarre as it is, is pretty straightforward.  It helps that he is largely a comedy director, since this may have become unwatchable in the hands of someone trying to make a serious horror film.  It is disturbing enough, but there is just enough dark humor to take the edge off.

The problem is, at times, there is too much humor that has nothing to do with the situation - most of it running through every Canadian cliche there is.  The "Canadian" people are all obviously American, and the accents sound nothing at all like any accent in any existent province of that country.  There are jokes about hockey, the cold, the use of "eh" and "zed" and "aboot."  These are jokes that people make jokes about just to parody how badly Americans stereotype Canadians.  If that was the point, then it was lost, as Smith went for every low-hanging fruit possible - right down to Guy LaPointe smoking cigarettes and wearing a beret.

That is heartbreaking, since at the heart of the movie we have Michael Parks in one of his best roles.  Whatever Howe's real name may be, he slips in and out of different identities as he lures in victims throughout Canada, and both his interactions with Justin Long and Johnny Depp are superb.  If anything, he underacts the part of the serial killer until the point where everything psychotic about him comes out.

Justin Long is decent, and kudos for him agreeing to be stuck in that walrus suit.  Unfortunately, the character he plays is terribly unlikable.  This I see as purposeful, as Howe on the surface is quite likable until the moment he begins removing body parts.  His friends may not be perfect, but even after he has treated them like garbage they still come looking for him.  If I thought for one moment that Wallace would have been thankful for that, then the transformation he goes through would be more disturbing.  Instead, the only reason to feel sorry for him is because it's a situation you literally wouldn't wish on some of the worst of people.

Despite all this the movie is generally a good horror film, and the second one that Smith has pulled off after Red State, although I kind of liked that one better simply because it wasn't undercut by a bunch of unfunny jokes.  Tusk is still a film I would recommend, largely because of Parks as well as good performances by Haley Joel Osment and Genesis Rodriguez, but it suffers from some of what Last House on the Left did when it switched from some disturbing horror to comic relief with a hick sheriff.  There was enough to be milked from the premise alone without resorting to the types of jokes any hack writer can come up with in 30 seconds.