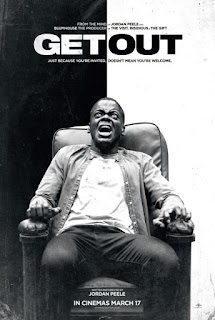 I am going to say right from the beginning that I am going to largely be avoiding jumping into a lot of what this movie has to say about race.  I know it's an important component of the movie itself, but it is not subtext; it is right there on the surface.  There is subtext, I am sure, that I have missed, simply because of a certain obvious reason.  Suffice it to say this movie had enough to it, and successfully presented it, in a way that there are now college courses focusing on the Black experience through horror films.  After this paragraph, I will leave all that to people who actually know what they're talking about.

What I know about, after all these years, is what makes a great horror movie.  Also, what makes a great director of horror movies.  I have also been frustrated in recent years that, just like many of my favorite musicians, my favorite directors are getting older, many retiring from the business or passing away.  Unlike most of the music I like, where I understand they are not being replaced in their genre simply because certain forms of music have reached their peak and are fading, I have been quite confused on why we haven't seen a new John Carpenter, Sam Raimi or Don Coscarelli show up.  Heck, we haven't even at least got a Wes Craven or Tobe Hooper in recent years.  Yes, great horror films have been made, and are being made, but besides James Wan and a few others (mainly associated with James Wan and Oren Peli) we are rarely seeing any specific style or development.

I know; Jordan Peele has only directed this one film.  I am truly hoping that he follows it up with, not a half dozen Get Out sequels, but an array of horror (and other) films that expand his talent.  He has a great talent, and eye, as a director that if given half the chance he will continue to stand out from the rest.

Young urban photographer Chris (Daniel Kaluuya) is preparing for one of the most awkward part of any relationship: meeting the parents.  Problem is, he is worried about how the parents of his girlfriend Rose (Allison Williams) are going to react when they find out he is Black.  Despite her assurances that they are liberal and accepting, she comes from an isolated world of privilege that is completely alien to him.  While he is worried about the awkwardness of the situation, his best friend Rod (Lil Rel Howery) is more concerned that he is walking into some kind of trap, as he feels there may be something off about Rose.

Dean (Bradley Whitford) and Missy (Catherine Keener) Armitage live in an isolated mansion near a lake, without direct neighbors.  Dean is a neurosurgeon, while Missy is a hypnotherapist.  Their son Jeremy (Caleb Landry Jones) supposedly is following in his father's footsteps, but seems to be a bit of a loose cannon.  Also present are their two Black servants - housekeeper Georgina (Betty Gabriel) and groundskeeper Walter (Marcus Henderson).  Dean explains to Chris that he knows what it looks like, but that they were hired to take care of his aging parents and that he just couldn't let them go when they passed away.  Of course, he assures Chris that he would have voted for Obama for a third term if he could have run.

Missy has a concern about Chris, but it's not his race: it's the fact that he smokes.  Rose has been trying to get him to quit, but he is reluctant.  When he believes everyone is asleep he sneaks out to have a cigarette, and encounters Walter, who almost runs him down.  He is also confronted by Missy, who hypnotizes him, sending him to a realm called "the sunken place" and doing work on him to supposedly cure him of his habit.

As it turns out, the therapy works, and right before an annual gathering of people who were friends of the family.  All of them are upper class white people, except for one Japanese man and an African-American named Logan (Lakeith Stanfield).  After being asked a series of increasingly awkward questions by the white guests, Chris tries to strike up a conversation with Logan, only to find the man strangely out of touch culturally.  He also thinks he may recognize him.  He takes a photo with his phone, and the flash suddenly causes a reaction - Logan's upper class veneer fades, and he tries to warn Chris to get out. He is taken into a session with Missy and soon returns to his former self.

After that ordeal he goes off to be on his own and encounters blind art dealer Jim Hudson (Stephen Root), who is aware of who Chris is and the work he does.  He describes how he never had the same talent, and became blind shortly after starting to work in his current field.

Chris's concerns about Logan are confirmed when he sends the picture to Rod, and it turns out to be Andre King, a person they knew from their old neighborhood.  He has been missing for six months, with his last known location being an affluent suburb.  After encountering the same disturbing trends with Georgina and Walter that he has with Logan, Chris rightly figures that the Armitage family may be up to something sinister, and decides it is in fact time that he left.  Unfortunately, Rose is not what she appears either, and they have something truly frightening in store for Chris.  Fortunately, his drive to survive, and Rod's persistence when Chris does not come home on time, may save him in the end.

That is why I am excited to see someone like Jodan Peele that gets it.  Early drafts had certain over-the-top moments and predictable endings that drove its racial points home, but the final product skips over all that.  We get a build up of strangeness until we finally reach a point where we are truly rooting for Chris to get through it.  And, also to Peele's credit, he didn't pull a Brazil type twist on us.  It would have been low-hanging fruit, but it's something that one would expect from many modern horror films.  By the time bad things really start to happen we are thoroughly on Chris's side, as we have also shared a number of awkward and cringe moments with him that didn't involve violence.

Also, when the violence starts, it starts at the right time.  It also slowly ramps up, going from some queasy medical procedures on up stabbing, shooting and stomping someone's head into the floor.  Like Carrie or The Silence of the Lambs, when the violence arrives it does so at a point where there is a reason for it, and not just because the makers of the movie are trying to appeal to the gorehound audience.

Daniel Kaluuya is great at connecting with the audience and letting us feel his awkwardness in trying to navigate through situations and a part of society he has never been a part of.  Lil Rel Howery provides some needed comic relief, as well as an important last connection to the outside world for Chris.  Bradley Whitford wisely does not try to ham things up in his part; in fact, his character probably believes most of the liberal talking points he strikes on.  Catherine Keener has always been a great actress, and this time around she barely is able to conceal how emotionless Missy is, almost giving away the whole game.  Allison Williams on the other hand switches between the real Rose and the Rose that she made up to lure Chris with no effort at all, proving the daughter is more dangerous than the mother.

There are many different ideas, and not just about race, that are brought up in this movie, and that I could go into much depth on from my own experience (i.e., thinking that talent is innate rather than the product of hard work, and the fallibility of thinking one can take shortcuts to become better), but to do so would get into a number of spoilers.  I know that most people know how this ends by now, but, again, even though I am quite able to enjoy the progress of a film even knowing the ultimate ending ahead of time, not everyone is.  Either way, Get Out does what all good horror should do: create an uncomfortable atmosphere while providing the audience a bit more substance than just a bunch of generic actors served up to be skewered, sliced and diced.