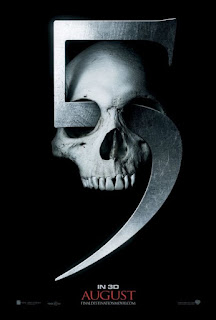 Some horror series manage to wear out their welcome rather quickly.  Still, you would think that a concept of having an invisible force that embodies death trying to right reality by killing off those who should have died in increasingly gruesome manners would have been something that would have sparked years of creativity.  There would be some especially high hopes since Final Destination was based on a script for an X-Files episode that was rejected.

Truth is, the first movie doesn't really live up to the promise of the concept, but Final Destination 2 surprisingly did.  It seemed the key, strangely enough, was not to take the concept as seriously as one would like to.  Instead, going over the top with some of the gore to the point of hilarity, while still making a decent film with characters you don't want to see die, seemed to be a perfect fit.  Unfortunately, this was conveniently forgotten for Final Destination 3 and The Final Destination.  Still the same directors for the first two, but they barely even attempted to phone it in, even if the latter was a bit better than the former.

So, two years after The Final Destination was supposed to wrap the series up, we get a fifth movie.  Like The Final Destination, this one jumps heavily on the 3D bandwagon once again. Happily, this time around they decided that maybe it would be a good idea to finish the digital effects before releasing the movie.  Also, we have a new director with Steven Quale, and a cast that, while still relatively unknown, actually seems like they want to be on the set.

The employees of Presage are gathering together for a fate worse than death: a weekend corporate retreat.  Sam (Nicholas D'Agosto) is an aspiring chef that is trying to decide on whether to accept an apprenticeship in Paris.  His girlfriend, and coworker, Molly (Emma Bell) has just made the retreat that much more awkward by breaking up with him.  Peter (Miles Fisher) is working his way up the company ladder at Presage, and is trying to look good for Dennis (David Koechner), a boss who can't even remember Sam's name.  Peter is also excited to be bringing along his girlfriend Candice (Ellen Wroe), who is interning at the company.

The bus trip starts out normal but, as usual, a vision of death comes, this time in the form of a collapsing suspension bridge, in which everyone on the bus except Molly dies violently.  Sam manages to get off the bus, dragging Molly along with him, and Peter and Dennis in pursuit.  Their friend Nathan (Arlen Escarpeta), who manages the factory joins them, as does fellow coworker Olivia (Jacqueline MacInnes Wood) and I.T. guy Isaac (P.J. Byrne).  The group makes it to safety just as the bridge begins to collapse behind them, killing the remaining coworkers who stayed on board the bus.

Initially Agent Block (Courtney B. Vance) is concerned that Sam may have been involved, but tests come back showing that it was a combination of weakening due to construction and high winds.  Everyone starts looking forward to the rest of their lives, facing the eventuality of their division closing after almost the entire staff was killed.  Death, as usual, comes knocking, taking Candice during a gym routine and Isaac during a visit to a spa.  Sam starts noticing Bludworth (Tony Todd) at the scene of each accident, but soon learns it is because he is the coroner.  He does have some advice: that if you survive, but give death a life in trade for your own, you may just survive.

With two people down Sam starts realizing that they are dying in the order in which they should have died in the bridge collapse.  They attempt to save Olivia, but fail; however, Nathan avoids his fate during a confrontation with one of the factory workers, when the worker suffers the fate meant for him.  Peter starts to realize that his time is coming up, and starts making plans to cheat death once again, since it appears to have worked for Nathan.  For Sam and Molly, that means their fate may end up being less than supernatural, and they now find themselves facing an all-too-solid threat.

This series may a better reputation if they had just skipped to this one instead of the third and fourth films.  For one, especially with its ending, it ties the events of the first two movies up quite nicely.  Also, as a semi-serious horror film with some great over-the-top death scenes, it is up there with Final Destination 2.  I find both movies equal to each other, and it goes to show what you can do with a concept that's getting stale once you get some new blood in.

It is at its heart one last chance to cash in on the franchise, so the movie is far from perfect.  There are a few CGI scenes (Candice falling on the sailboat, for instance) that are incredibly fake, and once again 3D is used as a gimmick rather than a way to enhance the film.  There is also no way to avoid feeling like we are watching pretty much the same movie once again, just with different circumstances.

Still, when it is good, like during Sam's initial vision and Isaac and Olivia's death scenes, it is truly a good modern horror flick.  I think it also helps that it was made a couple years after The Final Destination, since the 2010s started ushering in better genre films, returning in many ways to older plotting and filmmaking techniques rather than trying to be edgy and constantly appeal to a teenage audience.  The best horror flicks of the '80s and '90s were often the most overblown and ridiculous, which is a lesson that someone, somewhere took to heart.