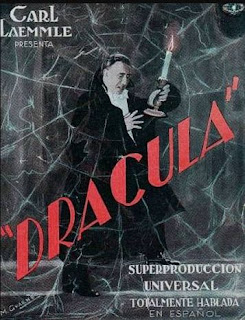 One thing the silent era made easy was for films to be distributed around the world, regardless of language.  Change the intertitle cards and, voilá, the film (as long as you don't read lips) could have been produced anywhere.  With sound films things changed.

Originally the Spanish version of Dracula, meant to be marketed to Spanish audiences in the United States as well as Mexico, was to just be a Spanish dub of the same movie.  Instead, it became more cost-effective to just film a second, Spanish version at night with director George Melford and a completely separate Latin cast.

Since the Spanish version was not beholden to some of the same restraints as the U.S. one, and also because producer Carl Laemmle paid a bit less attention and didn't demand the same editing as he did on Tod Browning's version, this alternate take on the story of the Transylvanian count (based on Bram Stoker's novel, the stage adaptation of it and F. W. Murnau's Nosferatu) has gained quite a bit of critical traction since it first became widely available again in the 1990s.  I think a lot of the reason is because this is much closer to the shooting script than the one we are used to seeing.

I will not go over the specific plot as it is generally the same as Dracula, and I do go over that in my review of the regular film.  There are significant differences, however.  First, the scene where Renfield cuts his finger is much loser to the scene in Nosferatu, and the following scenes aboard ship, rather than being recycled from the film The Storm Breakers, are completely new scenes shot specifically for Drácula.  An early scene of Dracula (Carlos Villarias) attacking a flower girl is gone entirely, moving straight into him inserting his life into the Sewards'.  The whole scene between Dracula and Van Helsing (Eduardo Arozamena) is redone, there is more discussion about the lore behind the Count and vampires themselves (much of it now canon), and it is made clear that Harker (Barry Norton) and Van Helsing eventually take care of Lucy (Carmen Guerrero, and renamed Lucia for this version).

In addition, rather than Dracula shewing away his wives, they are the ones that feed on Renfield.  The costume designs for Eva (Lupita Tovar), this film's re-imagining of Mina, are also quite daring.  Some of the gowns she wears leave absolutely nothing to the imagination.

Is it better than Tod Browning's?  I'd say it is equal in many ways, better in some places and weaker in others.  Villarios is good in the role, but Bela Lugosi has a presence that just cannot be duplicated.  Barry Norton barely looks old enough to drink, but then again he is given a fuller role than David Manners is.  Eva and Mina are such differently realized characters in the two films that it is impossible to really compare Helen Chandler and Lupita Tovar in how they approach the role.  As for George Melford's directing, he generally used the cues left behind by the day crew, but where he goes his own way it is much more in tune with sound films and owes less to the silent era.

Special mention must be made of Pablo Álvarez Rubio's portrayal of Renfield.  It would have been easy to just redo Dwight Frye's take.  While I still like Frye's the best of any Renfield I have seen onscreen, Rubio's is a great second place, making the role his own rather than being beholden to another actor's portrayal.

There is still the problem of very little soundtrack, although the inclusion of a few notes of Schubert's upon Dracula's rising is a nice touch.  The sound mix for the actors seems to be much better, though going without music, especially since this version is almost a half hour longer than the original, can be trying.

If you are used to the Lugosi film, don't go thinking that this is just a carbon copy in another language.  Although it is the same plot and same sets, in many ways it is a completely different film that should be appreciated on its own.