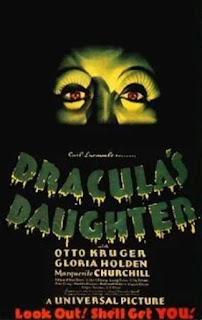 Dracula was one of the highest grossing movies in the 1930s, both during its initial run and re-release.  A sequel was inevitable, but there were a few things to overcome.  One, as usual, was Florence Stoker, who demanded more and more creative control in order to allow a script based on Bram Stoker's "Dracula's Guest" to be filmed.  Naturally, the studio also wanted to bring back Bela Lugosi; however, he was not going to be content this time around to accept next to nothing for filming his part.

It didn't help that Universal was having some financial problems.  The Laemmle family found themselves borrowing money to keep the studio afloat.  A Dracula sequel would conceivably help bring them out of trouble, but the movie only evolved in starts and stops.  James Whale was to direct, but his script was rejected, and eventually Garrett Fort was brought in to write it.  And, in fact, keep writing it, as the movie started filming before the script was complete.  It also went significantly over budget.

Shortly after the events at the end of Dracula, the police show up to Carfax Abbey and find Renfield's body at the bottom of the stairs.  They also encounter Professor Von Helsing (Edward Van Sloan, and, yes, the spelling changed) who denies killing Renfield, but informs them that the body of Count Dracula is in the other room.  Von Helsing is arrested for murder and brought to Scotland Yard to face Sir Basil Humphrey (Gilbert Emery), who of course cannot believe that Von Helsing's entire defense lies in the fact that Dracula was a vampire that needed to be dispatched.  Rather than a lawyer, the professor asks for the help of a colleague, psychiatrist Jeffrey Garth (Otto Kruger).

While preparing their case against Von Helsing, Dracula's body is removed by Countess Marya Zaleska (Gloria Holden) with the help of her servant Sandor (Irving Pichel).  She burns his body and casts a spell, hoping that his complete destruction will free her from her own life as a vampire.  The ritual doesn't work, but after hearing Garth's theories on being able to free one's mind by exercising willpower over that which troubles you, she decides to retain his services.  Garth's assistant, Janet Blake (Marguerite Churchill) is concerned that Zaleska's interest is more than professional, and does her best to sabotage the proceedings.

Bodies drained of blood, and with pinpricks on the neck, once more begin to appear around London.  Zaleska tries to follow Garth's advice, but fails, leaving a young girl name Lili (Nan Grey) partially drained of blood and in an hypnotic state.  Realizing that she cannot control her urges, nor be cured in any traditional sense, she decides instead that Garth should be by her side eternally and aims to leave London and return to Transylvania with him.  Garth refuses, but is forced to pursue when Zaleska kidnaps Janet.  However, it is Sandor to whom Zaleska has promised eternal life, and he is none too pleased to be replaced by another.

Edward Van Sloan was the only actor returning from the original Dracula, and he takes more of a background role here.  Garth eventually has no choice but to believe him, and he is present for much of the procedure, but he's not the man of action of the first movie or many of the remakes.  Instead, Otto Kruger gets to play the forever skeptical scientist that barely believes in the world of the supernatural, even after he is forced to confront it.  Kruger is decent, but Jeffrey Garth is really not that interesting of a hero.  His jealous secretary, played by Marguerite Churchill, is much more, and probably would have made a better hero if the makers of the film weren't already starting to worry about lesbian undertones to the story.

Gloria Holden, although she thought she was wasting her time in the role, is the definite star.  She gets much more screen time than Lugosi did, and a more complex story is given to Marya Zaleska.  She is coldly beautiful and, like Dracula, unblinking.  She does manage to do a bit of a better job blending into society than her creator.  However interesting her past is becomes undone by the fact that the film is so rushed; it seems like Zaleska was supposed to have more backstory, but much of it was cut.  It would have also been more interesting to see her struggle a bit more with trying to be human rather than giving it up after one try.

Because the rest of the cast is solid and Holden manages to stand out, Dracula's Daughter avoids being the mess it could have been.  It is still quite atmospheric in a number of places, even if it isn't permeated with a sense of dread like its predecessor.  It unfortunately is still a step down in quality.

Although successful, Dracula's Daughter was one of Universal's most expensive movies in the 1930s, and the Laemmles lost their control of the studio within days of its completion.  The new owners released the film, but further sequels to this and other movies in the Universal horror franchise had to wait until the 1940s, as the studio heads decided to pursue more mainstream film making.