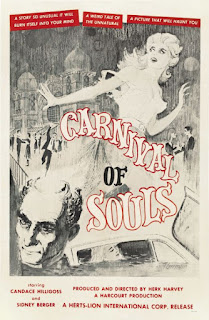 Recently on the website Quora there was a question about how a film becomes a cult classic.  My general answer, beyond the fact that trying to make a cult movie often fails miserably, is that there has to be some sort of vision behind it.  Anyone can make a terrible movie on purpose.  Few people can attempt to make a great movie and fall right in that area where they technically failed, but their talent still shines through.

The other thing that typically makes a cult film is that it could have been much more in the mainstream if budget constraints weren't an issue.  However, once again, the talent and vision of the people behind it often overcome that to put something unique on the screen.  Director Herk Harvey certainly accomplished that with Carnival of Souls.

Mary (Candace Hilligoss) is with her girlfriends when some boys challenge her to a drag race.  It ends badly, with her car going off a bridge and into a river.  Attempt to retrieve the vehicle and the bodies seem futile, but suddenly she appears on an embankment, shaken but otherwise not harmed.

Trained in playing the organ, she resumes her life and prepares to move to Salt Lake City to play the organ in a church, although she has no religious inclinations.  On the drive from Lawrence, Kansas to Utah she sees a strange face of a man (Herk Harvey) peering at her through the window of her car.  She also becomes fixated on the old Saltair Pavilion, sitting abandoned by the Great Salt Lake.

She arrives in town and rents a room from Mrs. Thomas (Frances Feist).  Also inhabiting the house is an amorous warehouse worker named John Linden (Sidney Berger), who does his best to romance the new tenant, even though she at first shows no interest.  After impressing the minister (Art Ellison) of the church she will be playing at, she has him drive her out to the Pavilion, but he refuses to take her inside.

As Mary tries to get on with her new life she starts seeing the man more and more.  In addition, she seems to have breaks with reality.  On a shopping trip to a department store she suddenly finds herself unable to hear any sounds or make herself known to other people.  She walks the streets of Salt Lake City desperately attempting contact, before the sounds come back as she leans against a tree in a park.  After seeing the man again, she attracts the attention of Dr. Samuels (Stan Levitt), who takes her into his office for a talk.  He suggests psychiatric treatment, but Mary decides that what she really must do is face her fear, which she believes is connected with the Pavilion.  She drives there, enters and walks through the abandoned carnival grounds and ballroom, seemingly seeing nothing but unaware of the souls that sleep in the water around it.

Her attempts to get back to normal fail, with a fugue state leading to strange organ playing which the minister considers blasphemous.  She is fired on the spot, and seeks refuge with Linden, whose interest soon turns to confusion and fear as she becomes more irrational as the evening goes on.  Finally, her landlady also decides that it is time Mary moves out after a night of hearing what appears to be furniture moving about in the room.  Dr. Samuels visits her one last time, and finds out that Mary is already intending to leave and head back to Kansas.

Her attempts to leave are thwarted by another incidence where she loses contact with the world.  She tries to board a bus, but finds it filled with ghouls with faces similar to the man who has been following her.  Eventually she winds up back at the Pavilion, where she truly must face the truth of what has been happening to her.

Herk Harvey and his screenwriter, John Clifford, both worked at a company called Centron, which made industrial and educational films.  The movie was supposedly inspired by Harvey seeing the abandoned Saltair Pavilion on a drive back to Kansas from California, and he gave a small outline of what he wanted to Clifford, who wrote the rest of the script.  One would expect the dull, plodding nature of educational films to show up in Carnival of Souls, but that couldn't be farther from the truth.

Being an industrial film maker helped, as there were obstacles that were overcome by using cameras not used in feature films at the time in order to capture location shots, like within vehicles and at the department store, largely because a number of the usual Hollywood tricks (rear projection and major sets on a soundstage) were out of the question.  Thus, as surreal as a movie as it is, one also gets the sense of normal people going about their lives during a certain time period.  This helps to increase the tension as Mary becomes more and more detached from that world.

The movie is also filmed in Academy format, rather than being in widescreen.  Harvey makes sure that everything is framed as if each scene were a photograph, particularly the beautiful shot of Mary practicing the organ near the beginning and the memorable scenes of the ghouls dancing in the ruined ballroom.  The editing and cinematography are absolutely wonderful and, though the film was largely forgotten for a couple decades, there is a reason why it came back and became so influential.

While I don't think the amateur performances hamper the movie, since one should really expect them considering the facts behind it, the script somewhat does.  Not what occurs, since Clifford seems to have been in line with Harvey's vision of what should appear on screen, but dialogue.  Candace Hilligoss does well in the lead, but Sidney Berger is unnecessarily a bit on the annoying (and rapey) side as John Linden.  It seemed like someone trying to write a character based on what they heard it should be rather than on what they truly would be.  It's close to the stalk "beatnik" characters you would expect to find in a short produced by a company like Centron.

Special note should be made of  Frances Feist.  Whether she intended to or not, she is one of the strangest landladies ever, and could have been teleported into this movie from a David Lynch film.

Carnival of Souls wasn't successful upon first release, and neither Harvey nor Clifford ever made in money on it.  They decided to forego their own salaries in order to get it made, and someone forgot to leave off the copyright notice on U.S. copies, immediately throwing it into public domain upon release.  It's a pity because Harvey was a natural at visually telling a story, and if he had ever been able to work with professional screenwriters he would probably be a household name.  At least he lived long enough to know that his movie eventually reached the audience he had hoped for.