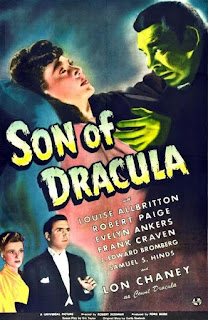 I am beginning to understand why Dracula left Transylvania and rented Carfax Abbey.  It was probably to try and get out of supporting his kids.  Don't get me wrong; child support is a good thing to make sure they're taken care of until 18.  When you get to immortals into the mix?  Not so good.  First we had his moody, goth daughter who had daddy issues, and now we have the ne'er-do-well son whose main scheme is to marry rich.  It's enough to make one want to greet the dawn with open arms.

In all seriousness, however, in this second sequel to the original Dracula, there is really little linking it other than the family name.  This time the vampire comes to America (not Brooklyn, so luckily Eddie Murphy didn't get any more ideas) instead of spending his time hanging around dreary old London.  However, junior is definitely not the sharpest fang in the mouth, as his ruse starts to unravel about the time his luggage shows up.

Said luggage arrives by train, and is retrieved by Dr. Brewster (Frank Craven), who notices that the count's name, Alucard, has a particularly familiar ring to it when spelled backward.  Count Alucard (Lon Chaney Jr.) has come to the American South at the behest of Katherine Caldwell (Louise Albritton), the daughter of wealthy plantation owner Colonel Caldwaell (George Irving).  Upon Alucard's arrival she throws a special party in which Frank Stanley (Robert Paige), formerly her fiancee, arrives to announce that Alucard is a phony, as there is no evidence his family even exists in Hungary.

It's at this point that strange things begin to happen.  The local which, Queen Zimba (Adeline De Walt Reynolds) is frightened to death by a large bat while trying to warn Katherine not to marry Alucard, and the Colonel also dies in a similar manner.  When the will is read, it turns out Katherine encouraged him to change it a bit, giving her sole title to the house while bequeathing his actual financial wealth to her younger sister Claire (Evelyn Ankers).  She then proceeds to marry Alucard, whom most of the town have yet to meet, and cut herself off from family and friends.

Brewster, curious because he has heard of the Dracula legend, contacts Professor Lazlo (J. Edward Bromberg) at the Hungarian embassy, who confirms there is no such family name as Alucard, but that Dracula is a bit too well-known.  He agrees to make the journey to meet with Brewster and investigate further.  Frank decides to take action on his own, confronting Katherine and Alucard, going so far as to try to shoot his rival.  Katherine ducks behind Alucard as he does and, as the bullets pass through the vampire, they kill her.  Pursued by the Count, Frank passes out in a graveyard and is saved only because, but luck, he falls before a headstone in the shape of a cross.

The next morning Frank comes to Brewster, tells him everything, and then goes to Sheriff Dawes (Pat Moriarty) to confess to the murder.  Only problem is, Brewster also went investigating.  Alucard found him checking out the cellar of the plantation, and brought him to see Katherine, who appeared to be completely fine.  When the police come with him to investigate the next day, however, Katherine's body is found in a coffin in the graveyard, and Brewster is accused as an accessory to murder with Frank.  However, with little evidence, he continues being free while Frank sits in jail.

Lazlo arrives, and he and Brewster start the search for where Alucard keeps his coffin.  Meanwhile, Katherine visits Frank in jail, and reveals her plan: she intended to bring Alucard to the United States and have him turn her into a vampire.  In addition, she reveals Alucard's lair, as she wishes for Frank to destroy him so that she can then turn Frank and the two can live together forever.

Unlike the first two movies this has nothing to do with any Bram Stoker material.  In fact, it came from a story that was written by director Robert Siodmak's brother Curt, and finessed by Eric Taylor.  In the way it twists and turns it often seems much more like a crime film than a horror story, although Alucard's pursuit of Frank does provide some thrilling elements.

Lon Chaney Jr. is not bad as a descendant of Count Dracula, but he has very little screen time.  The majority is Frank trying to win Katherine back while Brewster and Lazlo unravel the mystery of what is going on.  That said, Robert Paige is pretty one-note throughout, and J. Edward Bromberg is little more than a sidekick for Frank Craven.  Lazlo is definitely no replacement for Van Helsing.

Craven is likable throughout, even if he never truly becomes the main antagonist to Alucard, and Louise Albritton is beautiful and does a good job of turning icy and emotionless once Alucard brings her back from the dead. None of the separate elements may be as outstanding as the original Dracula, but Son of Dracula is still entertaining and quite a bit ahead of most of the Universal films of the 1940s, which tended to get sillier and sillier.  In this case they decided to take the subject matter as seriously as they did in the original, and it pays off without stirring in every other creature from their menagerie.

It should also be mentioned that, although the bats still look quite fake, there is a decent special effects job on the transformations, and an even better job showing both Alucard and Katherine moving from human form to mist and back.  While some of the more well-known horror elements may be missing, I give credit for using advances in effects to further drive home how not human the vampires really were.

Although House of Frankenstein, House of Dracula and Abbott and Costello Meet Frankenstein all brought back Drac himself, Son of Dracula can really be viewed as the last in the original series or as a standalone film.  I kind of prefer the latter, as it references to the original count being killed in the 19th century, as in the novel, while the movie version of Dracula took place in 1930s London.  Then again, continuity was never Universal's strong suit.