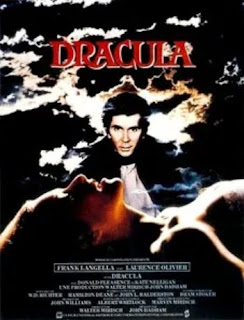 For some reason in my mind I equated this movie with another called The Curse of Dracula, which had been played as part of an NBC show called Cliffhangers in 1979.  For years I thought John Badham's movie had been sliced, re-edited and fit into that anthology program.  Turns out I was wrong, although I did remember seeing the end of it at some point when I was a kid.  Otherwise, this 1979 retelling of Bram Stoker's novel remains one of the more obscure versions.

It really shouldn't have been that way, but 1979, besides the television show, also saw a glut of vampire movies in theaters.  Werner Herzog remade Nosferatu while the perma-tanned George Hamilton parodied the whole genre in Love at First Bite.  Not to mention there were other Dracula-themed television movies and shows at the time.  It may be why I remember it as a jumble, since I was only seven at the time.

This time around we find Dracula (Frank Langella) arriving in England aboard the Demeter.  The crew gets wind of what he is and tries to throw him overboard during a storm, but he goes into wolf form and breaks out of his casket, murdering the crew.  The ship itself still makes its destination, crashing on the rocks outside of Whitby, a small town in Yorkshire, England.  There Mina Van Helsing (Jan Francis), a ward of Doctor Seward (Donald Pleasance) and his daughter Lucy (Kate Nelligan) sees the ship wreck and goes down to the shore.  She sees the wolf leave the ship, follows it and finds Dracula passed out in a cave, supposedly the only survivor.

Dracula soon takes up residence in the nearby Carfax Abbey as arranged by Lucy's fiance Jonathan Harker (Trevor Eve).  In bat form he attacks Renfield (Tony Haygarth) and begins using him as his guard and manservant, promising eternal life as a reward.  He then goes after Mina, eventually changing her into one of the undead.

Mina's father Abraham Van Helsing (Laurence Olivier) is informed of her death and makes the trip from Holland to Yorkshire to attend her funeral.  He is curious about what happened as none of the symptoms make any sense.  Soon, however, the truth comes together as Mina steals and kills the baby of one of the inmates at Doctor Seward's asylum.  Exhuming her coffin reveals that she was able to escape into the series of coal mines beneath the town in order to move about.

While Seward, Harker and Van Helsing manage to take care of Mina, a new threat emerges.  Lucy is falling head over heels for Dracula, willingly choosing him over Jonathan.  He begins to share the same feelings for her and promises to make her like him.  As usual, Van Helsing is quite on to Dracula, and the doctor's determination, as well as that of Harker, hint that it is time to leave and head back to Transylvania.  Dracula tries to make his escape, but is pursued in an effort to save Lucy's life, whether she wants them to or not.

Like the 1931 Dracula this was based largely on the stage play, where Frank Langella had been playing the title character as a more romantic figure than either Bela Lugosi or Christopher Lee had attempted.  He is also much stronger than either of the two.  While he cannot walk in daylight, he is not in catatonic state during that period, and is quite able to defend himself.  While he does not like crucifixes he is able to resist their power over him.  The main things he seems to have a problem with is garlic and mirrors. Also, as he does play a more romantic role, the Count has more time on screen than he has in previous films.

Laurence Olivier unfortunately was in a bit of a frail state himself while filming, and this comes through in his portrayal of Van Helsing.  The meeting of the tow nemeses is just as intense as in the 1931 Dracula, and almost the same word-for-word.  Too bad through most of the movie it looks like Olivier is about to blow over in the slightest wind.

Kate Nelligan is okay, if not spectacular, as Dracula's love interest Lucy, while Trevor Eves is quite bland as Jonathan Harker.  Donald Pleasance may have made a better Van Helsing, but he took the role of Seward so that comparisons wouldn't immediately be made with his character of Dr. Loomis in John Carpenter's Halloween, which had debuted the year before.

Some of the scenes, in particular the love scene between Lucy and Dracula and part of Dracula's death scene, appears to be heavily influenced by Ken Russell, who himself had been planning on remaking Dracula as well.  These scenes have a sort of surreal quality to them, much removed from the washed-out greys and blues of the rest of the film.

While not as popular as some of the other remakes, Dracula does move at a quick pace, takes advantage of special effects advances and benefits from Langella's performance.  Still, in an effort to keep a certain pace the movie often does feel rushed a bit disjointed.