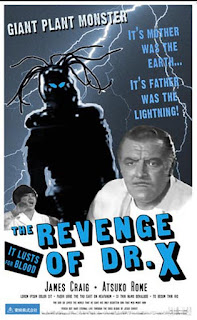 There are those that save up every cent in pursuit of their dreams.  They max out their credit cards to make a movie.  They go door to door trying to get investors.  The movie that they want to make, even if it is only one, has been floating around in their brain for years.  It has to come out.  It is a matter of life or death that this film see the light of day.

And, then, there are those who just really couldn't care about what they're making.  They somehow stumbled upon a few unused reels of film, put it in a camera, hired a couple people and pointed the camera at them.  At that point they might as well have just left to go home, pop open a bottle of sangria and call it a day.

The Revenge of Dr. X, also known as The Venus Flytrap and The Devil Garden (just so you are forewarned if you run into those titles) is definitely the latter.

Dr. Bragan (James Craig) is a NASA scientist who is starting to show signs of getting overworked.  His assistant Dr. Nakamura (James Yagi) suggests he take some time off and go to Japan to relax.  Dr. Bragan agrees, and heads out on vacation.  On the way to the airport he has car trouble and stops at a gas station that also has a roadside snake exhibit.  It's not the snakes that interest him, though, but the Venus flytrap the owner (Al Ricketts) has.  It's not for sale, but he lets Dr. Bragan know there are plenty out back.

Before becoming a rocket scientist, Bragan's main interest with botany, and he meets with fellow botanist and guide Noriko Hanamura (Atsuko Rome) upon arriving.  They set up at an abandoned hotel set up by Noriko's father, and together they start working on an experiment.  Dr. Bragan thinks predatory plants may have some sort of sentience, as well as a connection to human evolution.  After learning of an aquatic variation, he gathers a sample and grafts it to his already modified specimen that he brought from the States.

Using the power of an electrical storm, he creates a bipedal creature with the head of the aquatic plant, but with hands, feet and knees of a Venus flytrap. At first Bragan is concerned that it is dying, but soon learns why: instead of water, it craves blood.  Soon it is up and moving, and so are the local villagers, who are not too happy about their livestock and children being plant food.  Reluctantly, Dr. Bragan realizes that he must destroy his creation.

There are only two good things about this movie: the creature design (which is both strange and hilarious) and the fact that it may get you looking up better movies and information about the ama, generally female pearl divers in Japan.  Yes, they are topless in the movie, and this is kind of traditional, but if you get to reading about them, their history and their customs, it is much more interesting than anything that happens in the entire movie.  There is a documentary from the 1950s on them as well as pictures of them from the 20th century to the modern day.  Learning about aspects of Japanese culture will be much more rewarding than slogging through this dreary excuse for a film.

It should be obvious by now that I like bad movies, but there is a difference between likable bad and, "Why did anyone involved bother waking up and going to the set?"  Most bad movies either start off with someone trying to make a good movie and just utterly failing, or someone with talent being saddled with trash that they are able to somehow rescue.  What's rarely said is that there are quite a few like this one, where almost no one seems to be trying.  The Revenge of Dr. X had so little regard that its actual title sequence has nothing to do with the film, director or actors - they're the titles from The Mad Doctor of Blood Island.  I don't know if that movie is any better, but can't see how it could be any worse.

I say almost no one, because it seems that James Craig actually tries to do a good mad scientist impersonation, even after it becomes apparent that a good bit of this is just warmed-over Frankenstein.  His constant laughter, however, is annoying.  I have a feeling Atsuko Rome was a non-actor, or that there was simply a language barrier, so I can't really say much about her performance, other than she fills the need for a female assistant.  And, yes, there is a hunchback as well.

If you run across this, treat it with the same regard the people making it did.