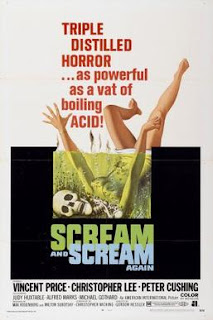 Somewhere deep inside the bowels of this fetid mess there is a movie of some sort screaming to get out.  Possibly three movies, to be honest, and at least one of them halfway decent.  Unfortunately, it's buried under a number of disconnected plots, top billings that turn out to be little more than cameos and a whole host of things that I guess we're supposed to care about.  There may even be an anti-communist message in there as well.

Unfortunately, it's a movie that never decides what it is going to be, nor who the actual protagonists or antagonists are supposed be.  It's like everyone on set had ideas, they filmed them and decided they didn't have time for editor to attempt to make the results coherent.

A man who is out jogging suddenly has a heart attack, and wakes up in what he first assumes as a hospital, looked over by a silent nurse (Kay Adrian).  Disturbingly, he finds that his leg is missing.

We switch to Konratz (Marshall Jones), the head of the secret police of an unnamed communist country, returning home.  The secret police decide to interrogate him, which results in him killing his interrogator with a fatal nerve pinch.  He then goes on to resuming his duties, which include interrogating and torturing people who try to escape.  His superior, Benedek (Peter Cushing), decides that his methods are out of step with where he wants the country to go.  For his concerns, and his attempt to remove Konratz, he himself is killed as well, and Konratz further consolidates his power.

Back in London a young girl (Olga Linden) is found violated and drained of blood in a park.  She happens to be an assistant of a Dr. Browning (Vincent Price), who is supposedly doing cancer research for the UK government.  Detect Supt. Bellaver (Alfred Marks) believes he might know more than he does and, when a second girl turns up murdered the same way, he uses one of his officers, Helen Bradford (Judy Bloom), as bate.  This turns up a man named Keith (Michael Gothard) who has been hanging around in clubs looking for victims.  Helen barely survives, and Bellaver and the rest of his squad give chase, with Keith eventually jumping into a vat of acid on Browning's property.

Konratz contacts Fremont (Christopher Lee), a member of British intelligence, to let him know that a spy plane that the UK sent over his country failed to self-destruct, and they captured both it and the pilot.  He agrees to return the pilot of the police files on Keith are handed over.  Pressure is put on Bellaver to close any further investigation into the case, though the coroner's assistant Dr. David Sorel (Christopher Matthews) decides to continue looking into things with Helen's assistance.

Konratz arrives at the police headquarters and kills Bellaver when the Superintendent won't let him remove the files on the murder from the premises.  Meanwhile, Dr. Sorel and Helen investigate Browning's residence.  Helen is captured, and Sorel meets with Browning who reveals that Keith, and a number of others, are in fact synthetic human beings merged with human flesh that are meant to be stronger and better, able to withstand war and disease.  Sorel seeks to stop Browning once he realizes Helen is next.  He is overpowered, but it turns out Konratz and Fremont both have interest in what is going on as well, and their own reasons for preventing Browning's work from going further.

One of the many frustrating aspects of this movie is seeing where good ideas went to die.  Alfred Marks is great as Bellaver, and the entire investigation and pursuit of Keith, as well as the reveal of what Browning was up to, while not a novel concept at least would have made a straightforward and fun film to watch.  It would have needed some padding (more synthetic humanoid killers would have done the job), but when we concentrate just on this we have protagonists emerge in Dr. Sorel and Bellaver that actually stand out.  Judy Bloom unfortunately is given a typical female role of the time, with the fact of her being a police officer being as far as they push the modern woman role.

It is here that we have the murder aspect, with Michael Gothard looking flamboyantly creepy as he stalks his pray.  Director Gordon Hessler obviously had a talent for filming action scenes, from the car chase to the pursuit on foot.  Again, not breaking any new ground, but between bloodsucking organic robots and a mad doctor (played by Vincent Price no less) with an acid vat, we have a good time.

Unfortunately, this is sacrificed in such a way that we have an entire separate plot that, at the end, is supposed to wrap up what exactly is happening behind the scenes, but instead comes across as a bunch of nonsense rather than a clever or frightening denouement.  Marshall Jones is quite effective as the evil and ambitious Konratz, but there is absolutely no hint at what the entire separate plot of him taking over a small communist country has to do with anything.  There is never anything shown of them having a scientist of their own doing the same experiments, or anything at all that connects the goings-on in the two countries until Fremont, played by Christopher Lee, is introduced.  That character doesn't really have any reason for existing, even this late in the game, until the very end when a sudden plot twist is revealed out of nowhere.

Christopher Matthews plays Dr. Sorel as your typical hero in a monster or sci-fi movie, but we don't even know he is supposed to be the hero until there is just a little bit left in the film.  Until that point he's merely a guy along for the ride when it comes to capturing Keith.  Helen suddenly goes from bate to an interested party to, of course, the damsel in distress.  As bad as not making it clear who the central focus is until much too late, having three different villains also removes the focus on what is going on, particularly when Konratz has more screen time than Browning.

That brings up the final point.  It relies on stunt casting to draw in its audience, promising three kings of horror, but killing Peter Cushing off after one scene, barely featuring Christopher Lee as anything more than a plot device and barely using Vincent Price in any capacity than to have him just play a mad scientist role that he could have done in his sleep.  Price is the only one of the three that has anything to truly do with whatever is going on, at least as far as we know, and any no-name actor could have played Fremont.

In the end we have all these elements dumped on the audience's lap, with an awful soundtrack to boot, including an attempt to push Amen Corner when they were practically already but broken up.