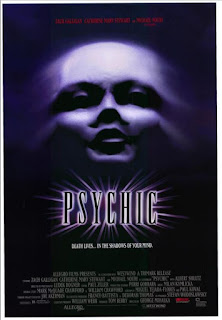 While many directors of classic horror films have gone on to continue entertaining in the genre, as well as expanding their horizons, George Mihalka became known for one movie only: My Bloody Valentine.  It may not have been a great movie, and it unfortunately suffered more butchering than the anyone in the film prior to release, but it had a memorable villain.  Also, being at the beginning of the whole slasher craze, didn't feel it needed to go over the same ground others did.

While he did a number of other horror and exploitation films, the bulk of Mihalka's work revolved around directing episodes for television series.  It's a good thing because he was never able to replicate anything as interesting as My Bloody Valentine, which was also rare in not having any sequels pop up.

Today cable series and movies are often of a quality above feature films.  There was a time, however, when a direct-to-cable (and often direct-to-video) movie meant that what you were getting could be of varying quality.  It was often safe to assume it was going to be pretty bad, usually not even up to the level of drive-in fare.  That is where something like Psychic comes in.

Patrick Costello (Zach Galligan) is a college student who has a crush on a teaching assistant named Laurel (Catherine Mary Stewart).  He lives with his best friend Nick (Albert Schultz), and has a secret he keeps to himself: he's psychic.  Clairvoyant, to be exact, with a healthy dose of precognition.  Lately, he has been disturbed by a number of dreams of women being murdered.

At first he thinks they are just nightmares, but when the girl (Susan Horton) he dreamed about shows up dead, he becomes concerned when he starts having visions of another woman (Andrea Roth) being murdered by the same man.  He has his suspicions, but they are confirmed when he goes to see Laurel for a date and runs into Professor Theodore Steering (Michael Nouri) in her apartment building.  It also turns out that Laurel and Professor Steering have a bit of a relationship as well, but not so much that she isn't willing to spend some time with Patrick.

Patrick's fears about Steering at first appear to Laurel to be adolescent jealousy, but she begins to fear they might be more when the detectives Markowitz (Ken James) and Spencer (Clark Johnson) start thinking Patrick may be the one responsible for the killings.  He decides to divulge to them that he is a psychic, which initially gets him dismissed, but his efforts to investigate get him caught breaking and entering both in the intended victim's apartment and finally in Steering's.  However, Patrick is eventually freed when a known sex offender (Bill Tarling), who happens to be one of Steering's patients, confesses to the murders.

Since it's not the first time his visions have been off, Patrick initially accepts the outcome, but becomes concerned when he starts having visions of Laurel's death.  At the time she is with Steering at an isolated lodge in New Hampshire, and Patrick races to rescue her.

No such luck.  It's purely by-the-numbers, and sloppily written to boot.  I found myself getting frustrated because, just in the way the police handled the case and treated Costello (with witnesses, I might add), even his sleepy-eyed public defender should have been able to get him acquitted even if some other guy hadn't popped up and confessed. Not to mention Patrick constantly committing real crimes, namely breaking and entering.

While Michael Nouri does a decent job of being creepy, everyone else, including Zach Galligan, seems to be sleepwalking through the film.  It's obvious we have a number of b-list actors that are simply going through the motions so they can get their paychecks, similar to many movies made for SyFy.

It doesn't help that George Mihalka still doesn't have anything that could be considered a signature style.  He knows where to point a camera, gets everything in frame and... well, that's about it.  He's competent.  If he was at least a bit inept then things might be more interesting, but he's simply present.

There is one memorable part in the whole affair.  Myra Fried shows up briefly as the strange owner of a tattoo shop, chews the scenery with the few lines she is given and, unfortunately, never shows up again.  If only everyone involved had put in that much effort then, cliched as the plot and everything may be, at least this would have been enjoyable on a camp level.  Alas, we don't even get that.