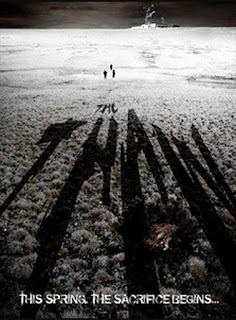 Unless you're George Romero and know how to do it without being preachy, please keep your politics out of my horror films.  That said, if you are so smug and up your own wazoo that you think anyone cares to have a finger wagged in their face throughout something that is supposed to provide an escape from such things, please try not to go over the same tired paces.

But, then, it was the 2000s, which was probably the absolute worst decade for horror.

Dr. Kruipen (Val Kilmer) is a scientist and radical environmental activist that is leading a research team on a remote Canadian island in the arctic.  They come across a polar bear feasting on the remains of a mammoth that has been revealed due to a receding glacier.  Soon, however, the entire team, including their guide Nuti (Lamech Kadloo), Krupien's girlfriend Jane (Anne Marie DeLuise) and assistant Jack (Garry Chalk) are all infected and dying from something.

Kruipen initially bumps a research student position so his daughter Evelyn (Martha MacIsaac) can join him, but then tries to get word out for her and the students not to come.  The orders are not communicated, and she arrives with bickering couple Federico Fulce (Kyle Schmid) and Ling Chen (Steph Song) and budding activist Atom Galen (Aaron Ashmore), brought to the station by helicopter pilot Bart (Viv Leacock).  They arrive to find the station abandoned except for the body of the bear, and something from it bites Bart when he gets too close.

Evelyn calls her father on the radio, reaching Jane and then him, and is upset to find out he didn't want her there.  Jane, slowly dying, shoots Jack and Kruipen, and heads back to the base camp where she sabotages the helicopter.  Evelyn wants to know what happened to her dad, and heads back out to the camp on the ATV Jane came in on with Aaron in tow.  They discover a grave, as well as the mammoth.  The mammoth itself appears to be infested with eggs and some kind of parasite that came back to life after the glacier began to thaw.

Thinking her father dead, she returns to the base station to find Jane has gotten worse.  She dies and they quarantine her, but it is too late; other parasites, initially thought to be insects but instead being an unknown prehistoric vertebrate, have already escaped the lab and infected by Ling and Federico.  Against the wishes of Evelyn to quarantine the site, Federico calls in a rescue helicopter.  It also turns out Evelyn's dad may have had more sinister motives when it came to how to deal with the parasites.

From the beginning the film sets out to make a point about global warming, one that gets extremely muddled in its on-again, off-again support of eco-terrorism.  I really hate bringing politics into my reviews, but unfortunately when a movie forces the subject, it cannot be helped.  That said, whether the warming of out climate is a natural cycle or the result of man-made pollution, one thing is for sure: smug attitudes and tentative support of murdering people to hammer home your cause are reasons why many people don't view climate change from a scientific point of view.  It's looked at as an anti-capitalist, specifically anti-Western and anti-United States attitude, which in turn is exploited by right-wing politicians as badly as exaggerated crisis mongering is by the left.  Screaming in someone's face either makes them tune you out as a lunatic, or punch you to make you stop.  It doesn't encourage debate, change or reasonable discourse.

The Thaw is in no way abut reasonable discourse.  It is about taking a valid scientific concern, that of what ancient viruses that existed prior to homo sapiens or that we lost immunity to thousands of years ago reemerging into the world, and boiling it down to a ripoff of The Thing while once again tacitly supporting alarmism and extremism.  Even worse, I don't know if director and screenwriter Mark A. Lewis even meant to do this, as there is no firm stand on what sacrifices need to be made to stop global climate change if it is man made.  He seems to reluctant to either condemn or endorse those who would weaponize a creature like this to make a point.

Politics aside, if we are going to get a ripoff of The Thing, we could have at least got the characters as well.  Instead, we get stalk slasher film characters: dreamy, pretty '00s kid to entertain the teenage girls, whiny teenage girl with daddy issues, sacrificial hero, panicking coward (need someone to destroy the radio at some point) and an extra person so that the few talented people you hired for the movie (the makeup and effects crew) has something to do except hit copy and paste with a bunch of CGI bugs.

No one here, including Val Kilmer, has a performance of note, and it's no surprise that all the unknowns in this have largely stayed unknowns, except, surprisingly, the pretty boy.  Aaron Ashmore has proven to be much better than the role he was given here, playing John Jaqobis in one of my favorite television series: Killjoys.  I guess it's nice that someone managed to claw their way out of what is essentially a movie that could cause careers to dead-end quickly.