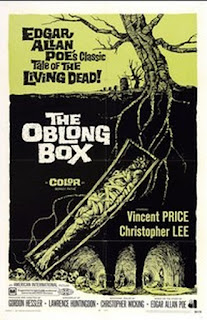 The advantage of using a title that is in public domain is that you can slap it on almost any old film, regardless of what it has to do with the source material, and see if you can attract an audience.  Such is the case of The Oblong Box which, other than the fact that there is a story by Edgar Allen Poe by that name, has less to with Poe and more about American International trying to make a quick buck.

Julian (Vincent Price) and Edward Markham (Alister Williamson) are on their plantation in Africa when an accidental death stirs up the already agitated local population.  Edward is captured and mutilated by a witch doctor.  Julian manages to reach him and free him, but not before his face and mind are both shattered.

Back home in England Julian keeps Edward locked in the attic, sometimes in chains, depending on how violent his outbursts are.  Edward has family lawyer Mr. Trench (Peter Arne) fetch an African sorcerer named N'Galo (Harry Baird) to help him escape and to restore him, but first he must get out of the house.  To accomplish this they plan to give him a drug to make him appear dead, and smuggle the "body" out of the house.

Instead, after finding his brother dead, Julian immediately nails him within a coffin.  He confronts Trench with the knowledge that he has been embezzling from the Markhams, and agrees to forget about it as well as pay 1000 guineas extra to find a body to lie in state in place of his brother's.  Rather than grabbing a dead one, Trench, N'Galo and an accomplice decide to create their own, killing the shady landlord where N'Galo is lodging.  After the viewing the body is dumped in a river and Edward is buried alive.

His burial is shortlived as real body snatchers in the employ of Dr. Newhartt (Christopher Lee) dig Markham up and sell him, killing a gravedigger in the process.  They sell both bodies to them, forcing him to stay quiet about the murder.  However, Markham, being very much alive, also blackmails Newhartt, forcing him to let him stay while he plots revenge against those who abandoned him for dead.  With a red hood over his face, his nighttime doings, particularly after the death of a prostitute (Uta Levka), start making the news.

Edward kills everyone in his way, eventually tracking down N'Galo and finding out why the natives did what they did.  He then decides that he will have his ultimate revenge upon Julian.

The original short story is one of Poe's less interesting, taking place on board a ship that gets caught in a hurricane while headed up the East Coast from the Carolinas to New York.  It's a recounting of a friend of the narrator who brings aboard the ship a strange box, which the narrator assumes are paintings.  It turns out to be the body of his dead wife, being transported for burial in New York, but in secret so that everyone else would not cancel their reservation.

Since that doesn't make for an interesting movie, it's understandable why American International went with a mashup of an early slasher flick with The Body Snatchers and a bit of live burial to make it more Poe-like.  This one is directed by Gordon Hessler instead of Roger Corman, since by this time he was largely moving on to other things.

Hessler is great behind the camera.  Problem is, he was rarely given good movies to direct, and this is no exception.  With Vincent Price and Christopher Lee it could have been much better than it turned out, but we have a series of murders that involve touching the throat with a knife than less pressure when getting a shave while red paint splatters on the neck.  For a vengeful lunatic Edward is clumsy and unintentionally funny at times, and the ending, desperately adding a twist, leaves much to be desired.